League CAO, Pam Antil recently spoke with the 2018 League of Women in Government Leadership Trailblazer Award winner, Opal Mauldin-Jones (City Manager, Lancaster, TX). Pam and Opal spoke about what it means to be the inaugural Leadership Trailblazer; the importance of coaching and mentoring women; and taking bold, strategic risks. Here is the interview:

Opal: I am so humbled and honored to receive the inaugural Leadership Trailblazer Award.  For me, it signifies that my intentions to be an example and a resource to others is making an impact.  I believe that I am only as successful if I can bring someone along with me and this award is representative of that focus and commitment.

Pam: What led you to a career in public service?

Opal: As a college undergrad, I was doing a paper on the role and responsibilities of a state or federal elected representative, and I wanted to identify a woman, Congresswoman Eddie Bernice Johnson had just been elected to Texas 30th Congressional District.  After visiting her office and learning the services her office provided to citizens, I applied for her summer internship. Public Service has been my calling since.

Ashley: Who were/are your mentor(s) in local government? 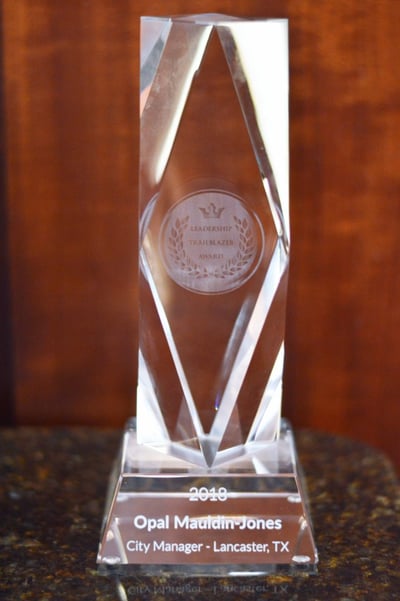 Opal: Julie Robinson, City Administrator Spring Valley, Texas was the first female that I reached out to early in my career.  She agreed to meet with me and talk with me anytime I had questions about becoming a City Manager.  When I first began working for the City of Lancaster, Jim Landon, now City Manager, Palm Coast, Florida hired me and I told him of my aspirations to become a manager and he told me that he would allow me the opportunity to participate in projects, assignments and training to further develop and grow in the profession.  Rickey Childers, Retired City Manager was officially paired with me through a Texas City Management Association Mentor Program and he later became my City Manager in Lancaster. I also consider Alan Sims, Retired City Manager, Cedar Hill, Texas as a mentor, while the relationship was never a formal mentor/mentee relationship, he is a manager that I have relied upon for advice, guidance and direction.  There are other former managers such as Karen Daly that I call on frequently for advice yet these have not been formal mentor relationships but individuals that I respect and admire in the profession.

Ashley: What is the most important lesson you learned from your mentor(s)?

Opal: Each mentor was unique in the perspective and support they offered. It is difficult to point to one lesson and say that is most important.  There were several

key lessons such as do not limit myself, take strategic risk, never compromise my integrity or ethics, know what’s important to the council and the community.  Always remember we are servant leaders.

Pam: We learned through the nomination process that many people credit you with coaching and mentoring them through the years, what wisdom do you feel is important to impart on women in the local government profession?

Opal: As women, I feel strongly that we do not pursue the Manager role because we want to feel “ready.”  It is important to know that we are ready, and we must apply for the position.  Oftentimes when I am talking to women they tell me that they need to wait until their children are older, or that they have never had this experience in one area or another.  My response is, we can have it all! We can have a successful career, with a healthy and happy family.  Create and nurture a solid support system at home and the office and know what is important to the family and what has to happen in the office and plan and schedule accordingly.

Ashley: You brought your daughters to the ICMA Conference where you were announced as the 2018 Leadership Trailblazer which is so fantastic! What do you hope they gained from this experience?

Opal: My children have never attended an ICMA conference and I have been attending since 2006.  Following my State association conference in June they asked about ICMA and I agreed they could attend.  My desire was for them to see their mother is a part of a profession that goes beyond just Texas.  I wanted them to meet and see local government leaders from around the globe.  As a proponent of being a life-long learner this was an opportunity for my girls to be a part of my experience.  As an African-American woman I also wanted them to see that while the population is still small, there are women and people of color in City Management.  The conference created an opportunity for them to talk to men and women from around the world during breaks and in sessions.  It was an honor to be nominated and recognized during the first conference they attended, it is definitely a memory of a lifetime for us.

Ashley: What advice do you have for women just beginning their careers who would like to be a city or county manager some day?

Opal: Take strategic bold risk.  Do not become focused on a specific path of steps you have to take to becoming a manager.  Every individual, community and experience are different. Mentor/mentee relationships do not have to be formal, connect with managers that you believe can offer you support, advice and guidance based on your interest.  Do not wait for something to happen, take necessary steps with communication, relationships/networks, projects, and opportunities to position yourself to go to the next level.  Join your state association, ICMA, League of Women in Government, ELGL, NFBPA, etc to expand your network, experience and opportunities.

Pam: Thank you for taking the time to talk with the League. Any other final thoughts for our members?

Opal: Thank you!  I am honored and humbled beyond words to be the recipient of this award.  My grandfather was a Baptist minister and I come from a family and belief of serving and service to others.  I believe that it is my obligation to give back and pay it forward.  I have been blessed by men and women that invested in me personally and professionally by giving me opportunities, sharing advice and guidance as well as support.  I am standing on the shoulders of many that have come before me.  As a woman and a person of color I feel it is my duty and responsibility to ensure that I am helping others by sharing any knowledge, experiences and opportunities.  Thank you again to the amazing women that submitted the nomination and to the League of Women in Government for this outstanding award it will forever be cherished. 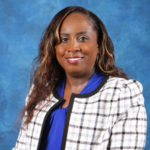 Opal Mauldin-Jones is the City Manager for the City of Lancaster, Texas. Opal’s municipal experience began as Community Relations Coordinator and Public Information Officer for the City in 2003 and progressed to her current position. Her public service career began in 1993 on the staff of United States House of Representative Member Eddie Bernice Johnson, 30th District, Texas. She also worked on the staff of Representative Bob Filner, 50th District of California. A native Texan, born and raised in Overton, Opal attended ARP Public Schools for her primary education and completed her undergraduate and graduate studies at the University of Texas at Arlington. Opal has completed numerous certification and training programs including the University of Virginia, Weldon Cooper Center LEAD and Senior Executive Institute training. She was also a member of the 2010 Leadership ICMA Class. Opal is a member of the Texas City Management Association, International City County Management Association, North Texas City Management Association, The National Forum for Black Public Administrators and Zeta Phi Beta Sorority, Inc. Opal enjoys reading and quality time with her family.

This article was originally published by the League of Women in Government.

Download Now
Previous story
← Using Community Feedback to Inform Priority Based Budgeting
Next story
The 2018 ICMA Conference Made Me Laugh, Cry and Journal My Favorite Moments → 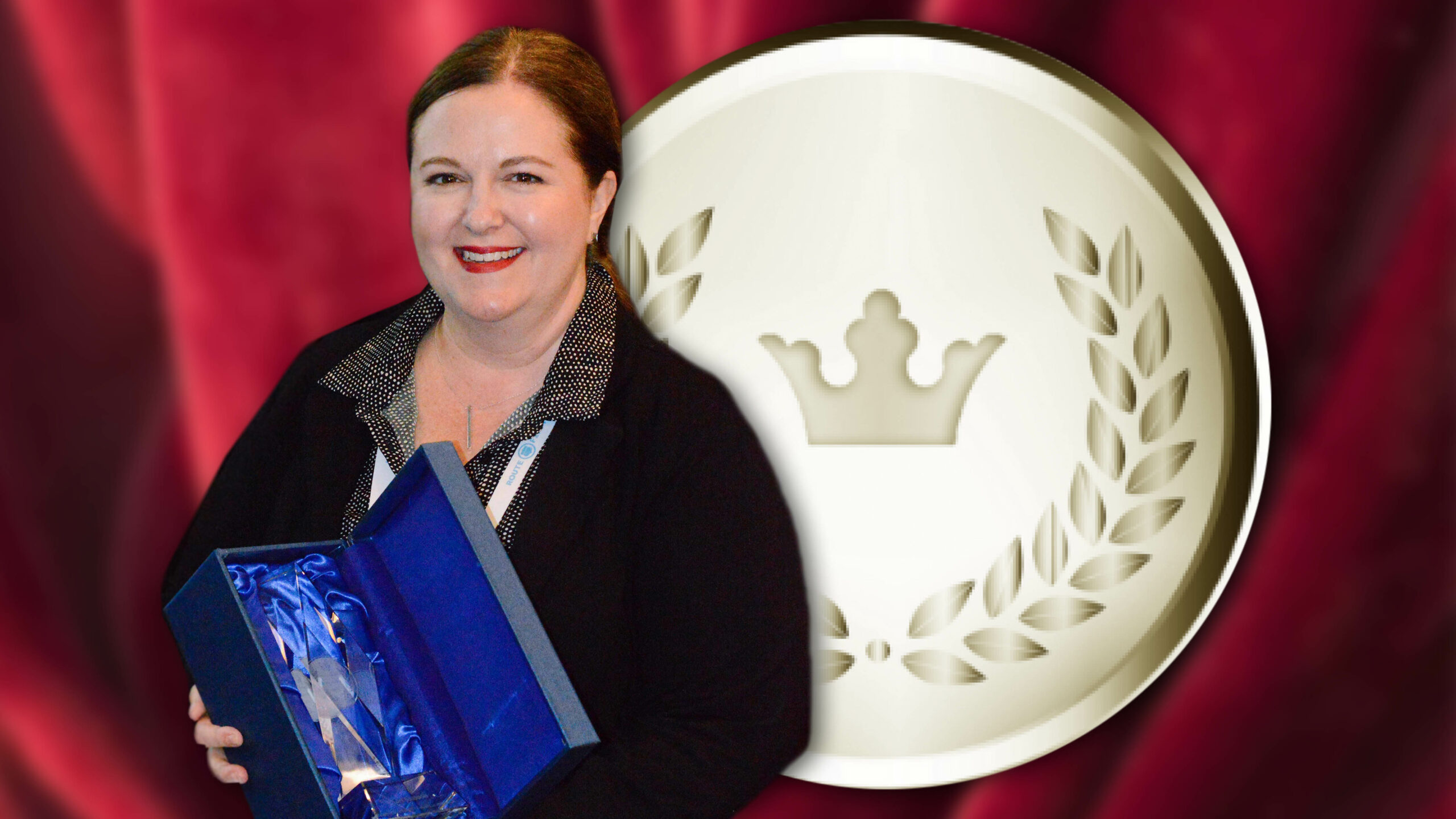