The 2018 ICMA Conference Made Me Laugh, Cry and Journal My Favorite Moments

It’s crazy to think that the Annual International City/County Management Association (ICMA) Conference has run 104 years!  I’ve represented National Research Center, Inc. (NRC), ICMA strategic partner, at the last four conferences. And I must say that 2018’s big event in the City of Baltimore was one of my all-time favorites. In fact, ICMA reports it was their third biggest conference ever, hosting 3,413 human beings.

No wonder this year’s conference was one of the best!  The crab cakes, for one thing, were delicious and plentiful in the charmed city.  But more earnestly, the content of this conference – the keynotes, the workshops and sessions, the networking – really made me feel inspired by and connected to the local government profession.  And I go to a lot of conferences, so that’s sayin somethin.

My Six Favorite Moments of the 2018 ICMA Conference

1. The League of Women in Government Symposium 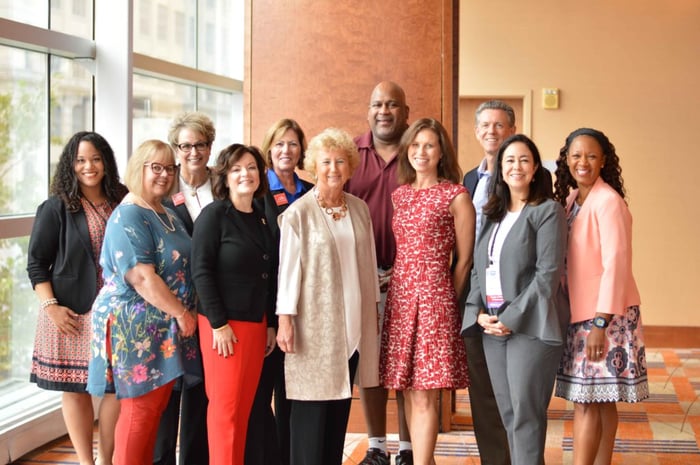 What do you get when you combine powerful women leaders, stirring keynote speakers and a couple hundred local government change-makers?  The 2018 League of Women in Government (LWG) Symposium!  It was magical, and I could not be any more proud of NRC for supporting it.

The recent movement to increase the #13Percent (percentage of women in city management positions since the 80’s) moved me to dig into NRC’s wealth of data.  We have this giant opinion database of how local government employees across the U.S. think about the workplace.  I wanted to see if The National Employee Survey™ (The NES™ ) could answer any questions I had about why the gender gap hasn’t closed after so many years.  And I learned where women and men see the local government workplace the same and differently.  I was pretty shocked to find that only 29 percent of women feel they have opportunities for promotion within their organization.  So I had the pleasure of presenting this and other stats at the symposium.  (I’ll be sending my slides out later with the info, so if you want them make sure to sign up for our newsletter.)

Then, the announcement of the first ever Leadership Trailblazer Awards Finalists and Winner!  These are the only awards in local government for women, and recognize outstanding achievement and leadership of other women.  NRC Survey Associate Damema Mann invited the Finalists to the stage and League President Ashley Jacobs presented them their medals.  Oh, you should have seen their faces!  The crowd cheering and clapping.  Each Finalist accepting their award like Olympic medalists.  Each one of them, truly inspiring and deserving.  This was a moment I will never forget.  LWG and NRC are proud to announce the Winner of the 2018 Leadership Trailblazer Awards is Opal Mauldin-Jones, City Manager of Lancaster, TX!

Here’s a Big Thank You to League CAO Pamela Antil, President Ashley Jacobs and the rest of the board for making it all happen!

3. The Voice of the People Awards 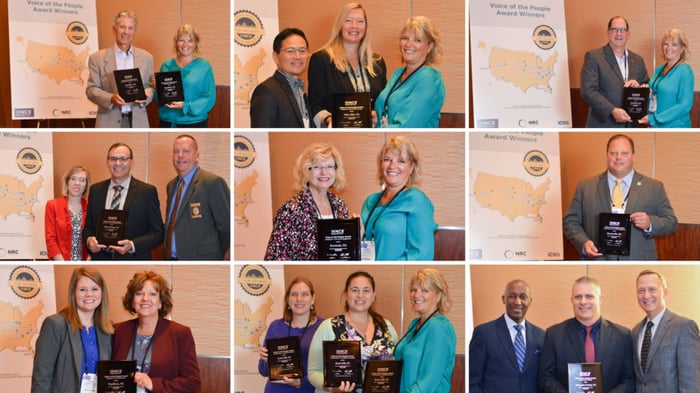 Once again, NRC teamed up with ICMA to present the tenth annual Voice of the People (VOP) Awards!  The VOP Awards recognize top jurisdictions that best listen and act for the benefit of their communities.  These are the only awards in local government based on resident opinion.  This year’s winners and finalists participated in The National Citizen Survey™ (The NCS™) in 2017.  And out of all the cities, towns and counties that surveyed that year, 15 of them got the highest or the most improved ratings from their residents.

After judging the VOP Awards and learning about strategies and practices that lead to the winners’ successes, I was jazzed to meet them in real life.  Throughout the month of October, we are announcing each and every one of the #VOPAwards Winners and Finalists on social media.  And later, we’ll share their stories with you too, so you can see what these local governments are doing to make their residents so happy.

4. So Many Learning Sessions 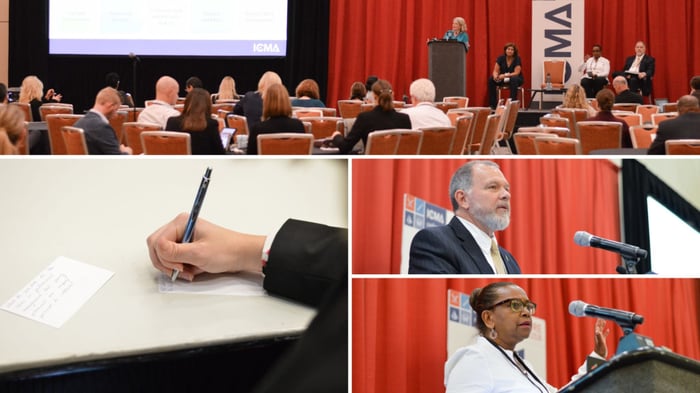 It’s not a local government conference without professional development and learning sessions.  For everything from Keynotes to Workshops, ICMA rounded up the profession’s finest thought-leaders.  ICMA noted that sessions this year focused on “creating smart communities that last … where people of all ages can live and thrive together.”

NRC Vice President Michelle Kobayashi shared her expertise at a range of conference sessions.  She explained to workshop participants how to gauge public opinion the right way.  The truth is, opinions provided by those “squeaky wheels” don’t often represent all residents.  So Michelle described how to engage residents in cost-effective ways that do not rely solely on the leanings of a vocal few.

Michelle also revealed the results of our latest study on how U.S. residents rate their local police services. We know that residents want their local governments to prioritize community safety first.  So with the help of the Bureau of Justice Assistance (BJA) Executive Session on Police Leadership, we’ve been developing a new benchmarking survey that shows what residents think of the public safety services provided them, and their most important priorities for police and public officials.

We also know it can be scary for managers to ask their employees what they really think about the workplace.  So Michelle invited Damema Mann (who manages The National Employee Survey) and local government super stars Connie Jacobs-Walton, Human Resources Director for Decatur, GA and Pete Petersen, City Manager for Johnson City, TN to present the ins-and-outs of employee surveys.  Connie and Pete described the lead-up, execution, and follow-up that helped set their organizations on the right track.  They also spelled out what you should know before you start your first employee survey.

(We’ll be releasing the slides for all this stuff later, so sign up for our newsletter to get access if you missed these sessions.)

I’m singling out ICMA’s 2018-2019 President Karen Pinkos, because she literally made me cry.  With feelings of pride to be connected to the local government profession.  Karen is the next City Manager of El Cerrito, CA (where she’s been Assistant City Manager since 2001) and the fourth ever female president of ICMA.  “We are ICMA,” Karen said to the crowd of over 2,000 local government leaders at her induction speech.  “It’s what we all do together for our profession, for local government world-wide … the thread that connects us all together is that we believe in what we do.  We believe in service to our communities.  And we care about the people that we serve.”  Wow.  How could these words not make you cry? 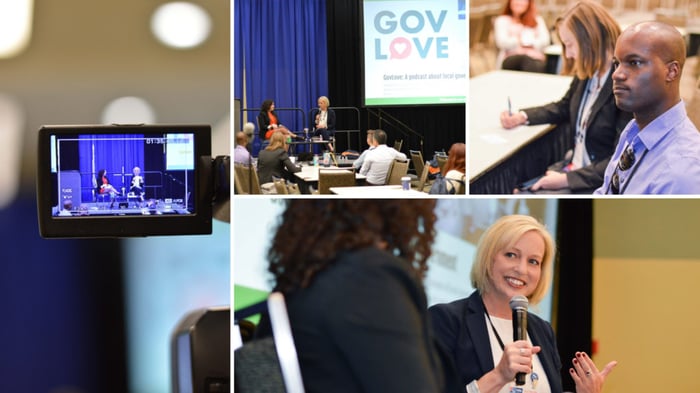 She was also a featured guest speaker on the number one local government podcast, GovLove by Engaging Local Government Leaders (ELGL).  GovLove recorded LIVE in front of a lively audience in Baltimore, and was hosted by Alyssa Dinberg, Cookingham-Noll Management Fellow for Kansas City, MO.  I got to join the crew to photograph the show and take over the GovLove Twitter account!  (Wow, are they brave or what?!  I mean, I could have posted cat videos.)  Karen made us laugh with her aversion to sports replay videos.  She described her career path and exposed her raw passion for local government.  Then she answered audience questions and gave us some great advice for our own careers.

5. The Evening Events in Baltimore 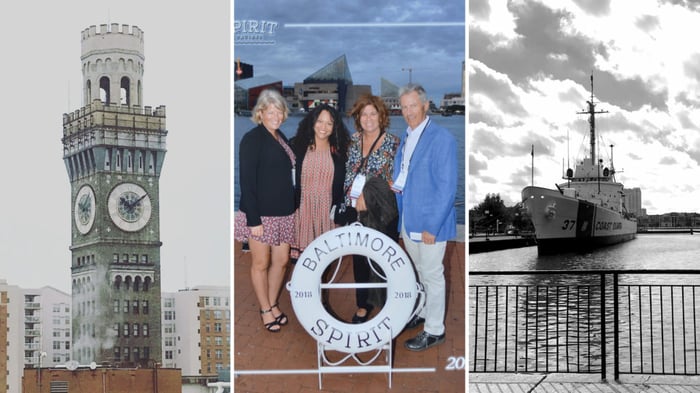 Honestly, I could single out a lot of wonderful people I spent time with at this conference.  (I would too … but then this blog would be a novel and I know ya’ll are busy!)  The evening social events gave us the opportunity to network and really get to know people.

One night I got on a boat with my NRC colleagues and had the best emoji conversation of my entire life with Heather Geyer, City Manager of Northglenn, CO. Then I played Jenga on the deck for like an hour with Matt Horn, Director of Local Government Solutions of the Institute for Building Technology and Safety (IBTS).  Another day the Broncos came to Baltimore to play the Ravens, so I ate chips and hot wings at the Colorado City County Management Association (CCCMA) football party!  And then spent evenings in the lounge, chatting up great ideas with friends, like our forward-thinking partner Alliance for Innovation (AFI). I even learned a whole lot about historical trains at B&O Railroad Museum with dozens of connections at the closing festival.  Did you know that Frederick Douglass secured his freedom by dressing up as a sailor, boarding a train to the North, and explaining to the conductor that he never carried his free papers to the sea with him?  True story.

NRC is a regular at the ICMA conference.  (I’ve lost track of how many consecutive years NRC has attended this conference, but I think it’s more than 15!)  So naturally, I spent a lot of time in the Exhibit Hall (with Damema Mann, the lovely lady pictured above).  The exhibit hall is so great!  It’s like a giant wonderland warehouse full of resources for local governments.  I mean, every kind of service or product you could ever need for your community or workplace is represented right there.  And all the vendors give out tons of free stuff (like the swanky wooden flash drives NRC hands out).  A lot of the other booths were giving out swag like office supplies, dog toys, popcorn and booze. (I’m looking at you, Bang The Table!) 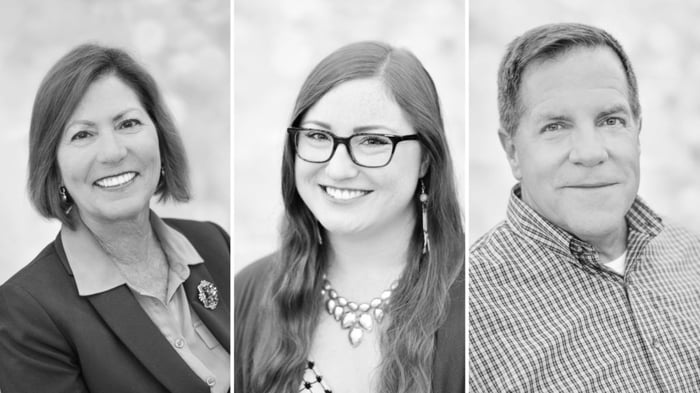 I did abandon my booth for a little bit to team up with Polco National Engagement Director Matt Fulton and take lovely portrait photos at the League of Women in Government’s “Her Corner” located in the GovHR booth.  That’s a whole lot of organizations working together to help make sure ICMA attendees had the best possible experience at the conference!  (For those of you waiting for your photos, I’ll email you the link where you can download them as soon as they are ready!)

Overall, the ICMA conference reminds me why I love my job.  All you local gov. leaders have a huge impact on your residents’ lives.  And you love your communities.  Working at NRC allows me to play a small part in helping you move your communities forward.  And spending time with you at this conference shows me what it’s all about.