Do Americans Feel Law Enforcement Has Failed Them?​ 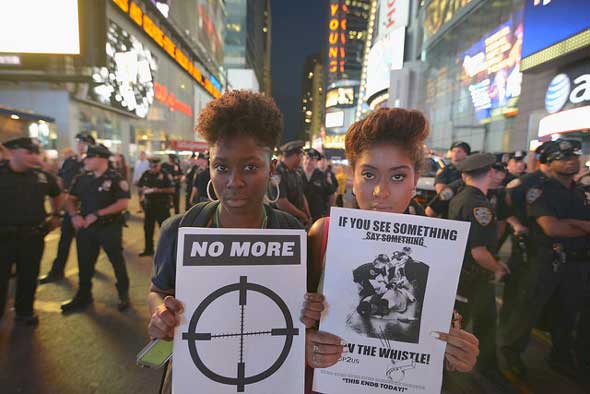 Current news has been saturated with incidents of racially escalated police violence. Imagery depicting mostly young, black men shot by mostly white police officers has incited waves of further news and editorials, strong emotions and a national movement. A Google search of “Race and Police Brutality” pulls up scores of web-posts asserting ill-intent and bad behavior on the part of America’s police forces.

Questions are raised. Are African Americans disproportionately targeted by law enforcement?  Do people of color feel that police threaten them, while protecting others? Do stories of racially motivated police brutality affect the way average U.S. citizens view their own local police services?

There are few credible national statistics on incidents of police violence, and most of what is available excludes the race of the police officer even if it includes the race of the alleged offender.  While we may not have solid numbers to prove whether or not race is a factor in police judgement, we do know what average Americans, of diverse racial makeup, think about the police that are hired to serve and protect them in their own communities.

National Research Center, Inc. (NRC) has been conducting opinion surveys of representative cross-sections of America’s residents in cities, counties, towns and villages since 2002. In every one of 350 jurisdictions in 44 states, a random sample of residents of all races (as defined by the U.S. Census - data from Hispanic ethnicity perceptions on police to be released in a later article) has answered the same question asked in NRC’s The National Citizen Survey™,

“Please rate the quality of each of the following services in [community name]…Police”; “Fire”; etc.

With over 350,000 total respondents identified as White, African American, Asian or Native American, NRC can determine how average Americans regard their local police services.*

Does race play a part in how average Americans regard local law enforcement?

Overall, opinions by African Americans about local police services are not as negative as headlines lead one to assume. Across all participating jurisdictions of The National Citizen Survey™, the majority of White and Asian Americans gave noticeably positive ratings to the quality of their local police services, rating them as “Good” or “Excellent.” Nearly two-thirds of African American and American Indian residents also rated their police services well. These sentiments are meaningfully more positive than those from a 2014 Pew telephone survey of 153 Black Americans1 or a recent poll of Maryland residents. 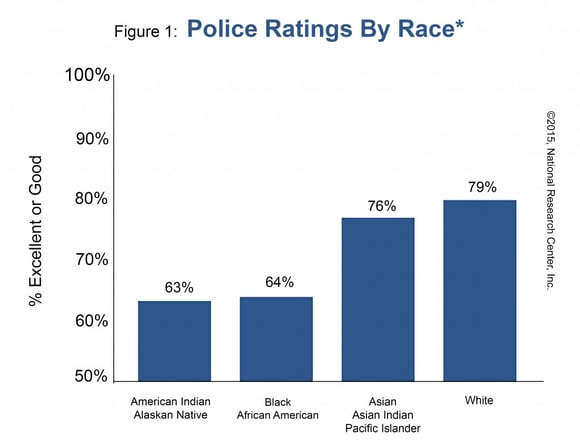 Although ratings of police by African Americans and American Indians were mostly positive, they fell 15 - 16 percentage points below ratings by white residents (on a 100 point scale).

Do sentiments about police from residents of various races change depending on the racial makeup of the community?

Of all 350 participating jurisdictions, on average, the majority of residents of any race gave excellent or good ratings to local law enforcement. This was true every year going back to 2002 and remains true through most of 2015. 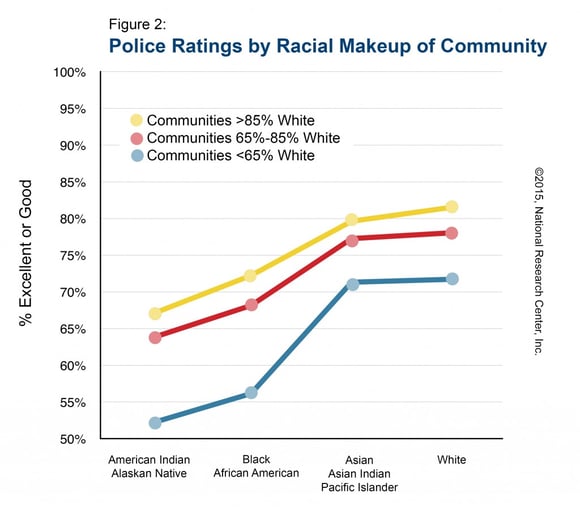 Why do African Americans and Native Americans rate police services lower than residents of other races?

The data, in a sense, represent a scorecard, not a script explaining the reason for the ratings.  The data do not tell us if African Americans face different circumstances in predominantly white communities or if police attitudes change with darker community complexions.

But it is clear, across America, that there are differences in perspectives about police service depending on the diversity of the community and the race of the resident. It is also clear that, on average, Native Americans report the lowest opinion of police services compared to other races, followed by African American residents and that this trend sustains across communities with varying racial representation. And, finally, their much more positive ratings of fire services demonstrate that Native Americans’ and African Americans’ less favorable opinions about police are not fueled by generalized dislike or distrust of public service personnel and officials, as indicated in Figure 3. 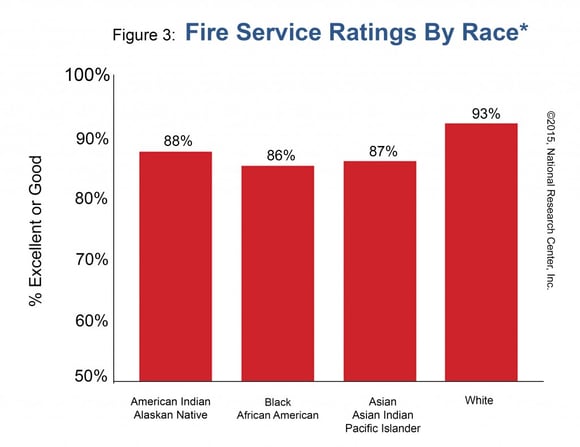 Since no single jurisdiction is identified in this study, city officials everywhere should seek to understand how different racial groups view their public safety services and racial groups’ sense of safety in the community. With even modest but regular community outreach, local government leaders everywhere can ask residents why they feel the way they do and make efforts to sustain or improve everyone’s confidence in law enforcement.

The data represented in this summary were collected by National Research Center (NRC) from residents selected using probabilistic sampling2 within communities that hired NRC to conduct The National Citizen Survey™. The communities themselves were not selected at random and are not necessarily a representative cross-section of the country. The communities varied in population from approximately 1,500 to 1,200,000 (America’s largest and more diverse cities were not included, as they conduct custom surveys rather than surveys with common questions as is the case with The NCS™) and were located in 44 states (excepting Maine, Mississippi, Alabama, Louisiana, Alaska  and North Dakota). Data were collected beginning in 2002 continuing through June of 2015. The number of white residents, within rounding, included in the analysis reported in Figure 1 was 306,000; Native Americans, 7,900; African Americans, 23,000; and Asian Americans, 17,500. Similar numbers were included in the other graphical displays.

Most of the data were collected via U.S. Postal Service (USPS) mail or on the Web. Web responses were collected only from those residents selected to participate in the survey and invited by USPS post cards and letters. Therefore, none of the records included “opt-in” Web respondents and few were collected by telephone. In almost every survey, younger residents and residents of color (all non-white races), were underrepresented compared to known Census community characteristics and home owners were over represented. In some, but not all jurisdictions, surveys were available in Spanish and English. For each jurisdiction, weighting of respondents resulted in a close approximation of the location’s Census profile of race, age, gender and home ownership. For this aggregate presentation, no weighting was done.

1 The most likely reason our results were more positive than Pew's is that The NCS™ asked specifically about local police service, while Pew's questions asked about police in general.  Also the apparent difference may, in part, be explained by the fact that the biggest and more diverse cities in America were part of the Pew study but not this one; the Pew questions were about more specific police behaviors than overall ratings of police services; these data include ratings from the last 14 years whereas Pew data were from 2014; or the margin of error around the Pew sample includes the findings in this report.

2 Households were selected using systematic sampling, sometimes stratified by geographic areas with oversampling of attached units. A skip pattern was applied to an address-based sample and the adult (18+ years old) in the household with the most recent birthday was asked to respond. With three mailed contacts (post card notifying of selection, followed by two successive mailings of the questionnaire with a cover letter from the mayor or other senior official), typical response rates averaged about 40 percent until around 2010 when response rates began to decline to about 30 percent on average, where they stand now.

This is an updated article originally published in 2015.

Related Stories Around the Web