When communities are growing, it can be easy to sit back, relax, and bask in all that is well. But it’s rare that a community looks far into the future to make sure they are prepared for what comes. And it is even rarer when a community asks residents to join them along for the ride.

The Town of Gilbert, Arizona is that forward-looking place.

Gilbert is a suburban town whose population has doubled every five years since 1980. By 2030, leaders expect Gilbert to complete its growth, with an anticipated population of more than  300,000.

“Many suburban communities experience cycles of growth and decline. While Gilbert is currently in a cycle of growth, that could eventually change once the community is fully built-out in a decade or two. Our goal is to try and work with residents to understand at a much more specific level what we need to do to make sure that Gilbert still continues to thrive 20 years from now,” said Patrick Banger, Town Manager.

This commitment to transparency and long-range planning has led Gilbert to be a great place to live, play, and work.

Data shows that Gilbert’s residents experience a strong quality of life and think highly of their government. The Town  regularly conducts The National Community Survey (The NCS) to gather feedback from community members. In fact, 98 percent of residents rate the town as an excellent or good place to live in The NCS. This level of resident satisfaction is so high that only four out of 395 other municipalities nationwide ranked higher. And, all measures of government quality also exceed the national benchmark. In fact, many of these aspects also ranked in the top ten nationally.

“Gilbert is an amazing place for its commitment to open government, resident feedback, and planning for today and the future,” said Damema Mann, Director of National Engagement at Polco.

For its efforts, Gilbert has received the 2020 Voice of the People award for Excellence in Foundations of Livability. This is the only national award that honors local governments based on feedback from residents. The award is presented by Polco / National Research Center (NRC) and the International City & County Management Association (ICMA). This award acknowledges local governments with the highest ratings from The NCS and that take the best actions on behalf of their communities. 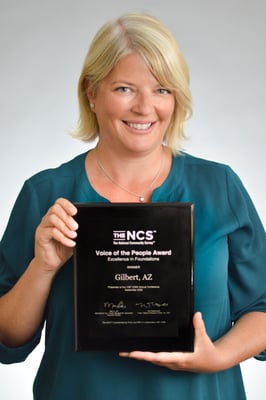 “Our transparency and commitment to communication and engagement of our residents builds trust,” said Melanie Dykstra, Community Resources Supervisor.

The Town’s Office of Digital Government manages over three dozen social media accounts and publishes a regular podcast. The Office also works with leaders to craft and implement a digital roadmap strategy to be a leader in digital government. The Town has won a number of awards as a result of this work.

In addition, Gilbert has an open data portal for the town that helps tell Gilbert’s story using data. The portal shows relevant local trends and statistics. The portal also helps to showcase The National Community Survey (The NCS) results.

For example, Gilbert has recently invested significant infrastructure in parks and recreation opportunities as a result of feedback on The NCS. The Town built a regional park that includes a large playground, and a splash pad. Future phases of the project include a seven-acre lake, performance pavilion/amphitheater, event lawn, and sport courts.

Town of the Future

Gilbert leaders know that planning thoughtfully for the future is essential to the Town’s success.

“The people are here and the businesses are coming. We are going to be just fine tomorrow. It’s the 5-year and the 10-year and the 20-year marks that I want to make sure this community is prepared for,” said Gilbert Mayor Jenn Daniels.

During the Town’s 100th birthday in July 2020, the Town announced its mission to be a Town of the Future. As part of the birthday celebration, leaders developed three new focus areas: prosperous community, strong economy, and exceptional built environment.

One component of the plan is to strategically maintain existing infrastructure over the next few decades. Another focus will be innovative growth and economic development. The Town has developed a long-range financial plan and established an Opportunity Zone to spur smart development in Gilbert’s Historic downtown.

“We will continue to solicit feedback, engage with our residents, and use data. We will not just sit back and let growth happen, but proactively drive growth in ways that will have long-term benefits,” said Dyskstra.

Previous Story
← Five Ways to Take the Edge off Your Stress Now
Next Story
Can Carefully Targeted Cuts Help With COVID-19's Budget Hits? →