Employees are quitting in record numbers. How can local governments keep them around?

Over 38 million workers left their jobs last year and the quit rate is carrying over into 2021. More than 4.5 million Americans left their positions in November, an all-time high. The employee-employer dynamic shift affects every industry. But The Great Resignation's impact on local government creates unique issues. It has many rethinking how they operate.

Allyson Brunette is one of the many who put in her two-weeks notice after nine years in local government. Pandemic-related staff shortages led to burnout that crept into her home life. She stopped doing all the things she liked – cooking, walking the dog, sleeping, and being, you know, hydrated. 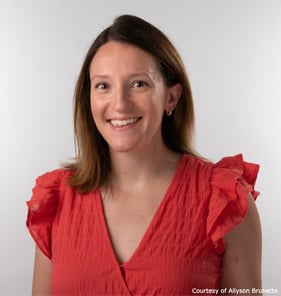 “Even though I know I should stop mainlining coffee and have a glass of water, am I doing it? No,” she said. Caffeine became essential to keeping up with an extraordinary workload at an extraordinary pace. The work itself didn’t change, but the volume did.

“It was affecting more than my 9-to-5. It was my whole 24 hours,” she said. Eventually, Brunette left for good.

Fields feeling the most pressure from the pandemic, like hospitality, retail, and healthcare, are seeing a drastic decline in workers. But people are leaving the workforce across the board. In local government, job applications dropped off an alarming 32 percent over the past two years, reports Route Fifty. And according to the Rockefeller Institute, quit rates nearly doubled from 2010 to 2020.

Why Workers Are Leaving Local Government

Benchmark data from National Research Center at Polco gives insights as to why. The National Employee Survey (The NES) measures the local government workplace based on employee opinions. This nationwide database shows what matters most to job satisfaction.

Survey results point to work-life balance, morale, and fair compensation for why people are quitting in local government.

According to The NES, a meager 39 percent of respondents believe they are fairly compensated for their level of performance. Only 55 percent feel appreciated for their work. And while 65 percent report positive staff morale, this means 35 percent reported fair or poor ratings. Addressing these areas could help prevent burnout. 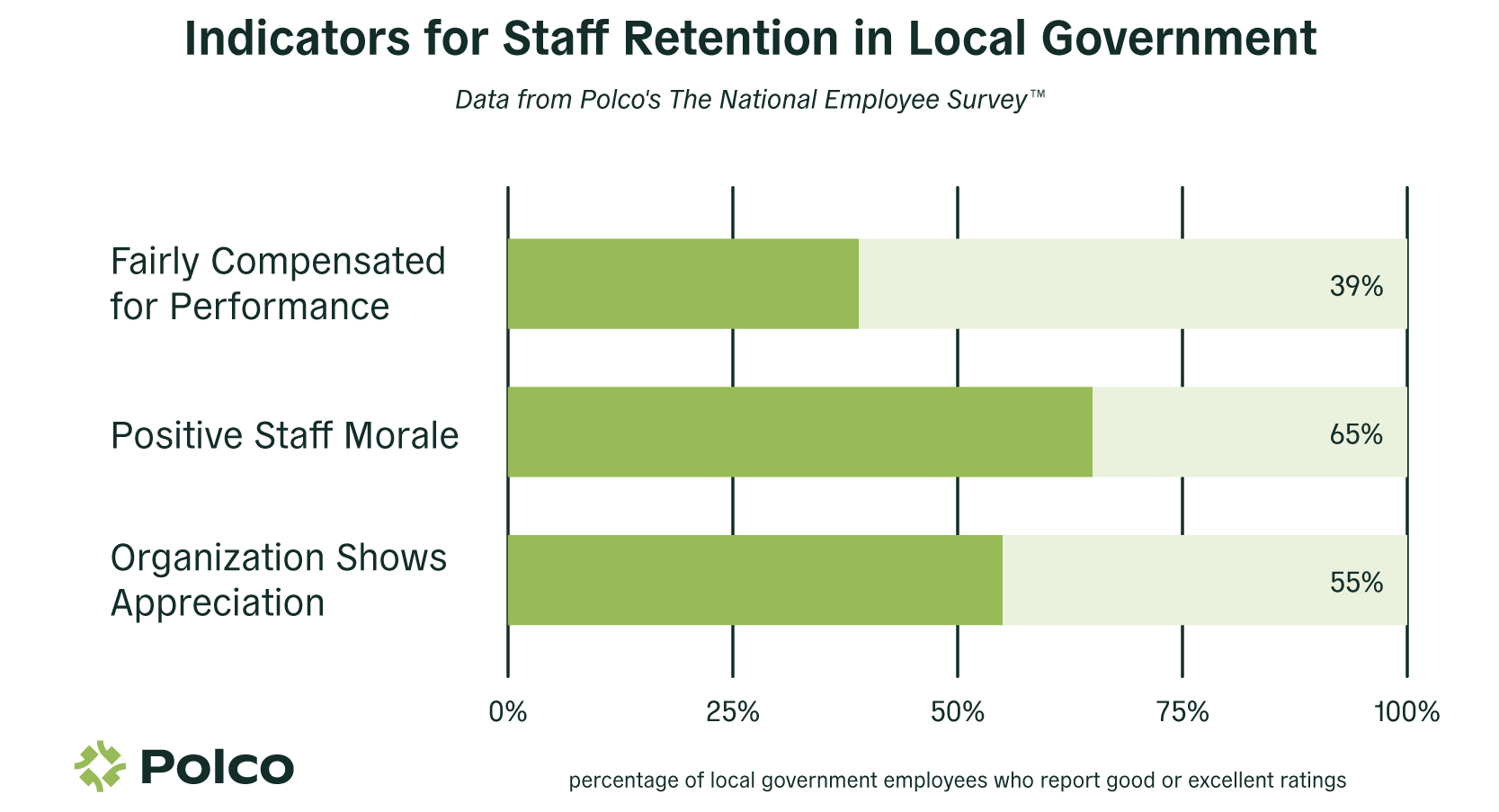 “Unlike the private sector where you can modify the work you take on to fit your team, the work isn’t optional in local government,” Brunette said. “It’s either there, or it’s not. There is a baseline level of services that you need to provide your residents, regardless of what your staffing levels look like.”

Former city manager and CEO of local government executive recruitment firm SGR, Ron Holifield, has been busy. He and his team are working to fill a record-level of 100 positions due to a convergence of issues.

In local government, Holifield said the staffing gaps come from the spike of boomers who traded in their loafers for pickelball sneakers and finally retired. Covid and partisan politics exacerbated the issue.

“They are tired of the political abuse, and they are tired of hatefulness among citizens with which they are treated,” Holifield said. “We’ve basically been in fight-or-flight mode since Covid began, and so it’s just wearying.”

Holifield describes many government workers as people who “want off the treadmill, but they don’t want to quit.” Some employees, especially parents, are making backward moves for a lighter workload. Number two positions are unwilling or underprepared to take on more demanding roles, leaving more vacancies in upper management than a seedy roadside motel.

In a recent Politico interview, White House Labor Secretary Marty Walsh said, “Everyone talks about the Great Resignation, and I think what we’ve seen there is not necessarily resigning from work but resigning from their jobs—a job that was not fulfilling enough for folks.”

People are seeking more enrichment, more family time, or are taking the chance on entrepreneurship. That’s what Brunette did. She started her own government consulting company and can now walk her dog any time she wants.

“If the pandemic has taught us nothing else, it’s life expectancy is not a guarantee. I don't want to live for 65. I want to squeak some joy out of it in my 30s,” she said.

Today, local governments need to fill 928,000 jobs, reports the Rockefeller Institute. And there are over 10.9 million job openings total, according to the Bureau of Labor and Statistics.

The Great Resignation gave private-sector employees leverage to ask for flexibility, better benefits, higher pay, and remote work. But some of these changes are at odds with how many governments typically operate. The optics of government employees staying home may look bad to the public eye. That’s why so few municipalities have embraced remote work. But Holifield and Brunette disagree with the resistance to new normals.

“Local governments that are not willing to change how they think or get outside of the box are going to have an increasingly difficult time recruiting,” Holifield said. “Because the best and the brightest are just saying, ‘No I am not willing to work the way my father did or my mother did. I am going to have a balanced life.’” 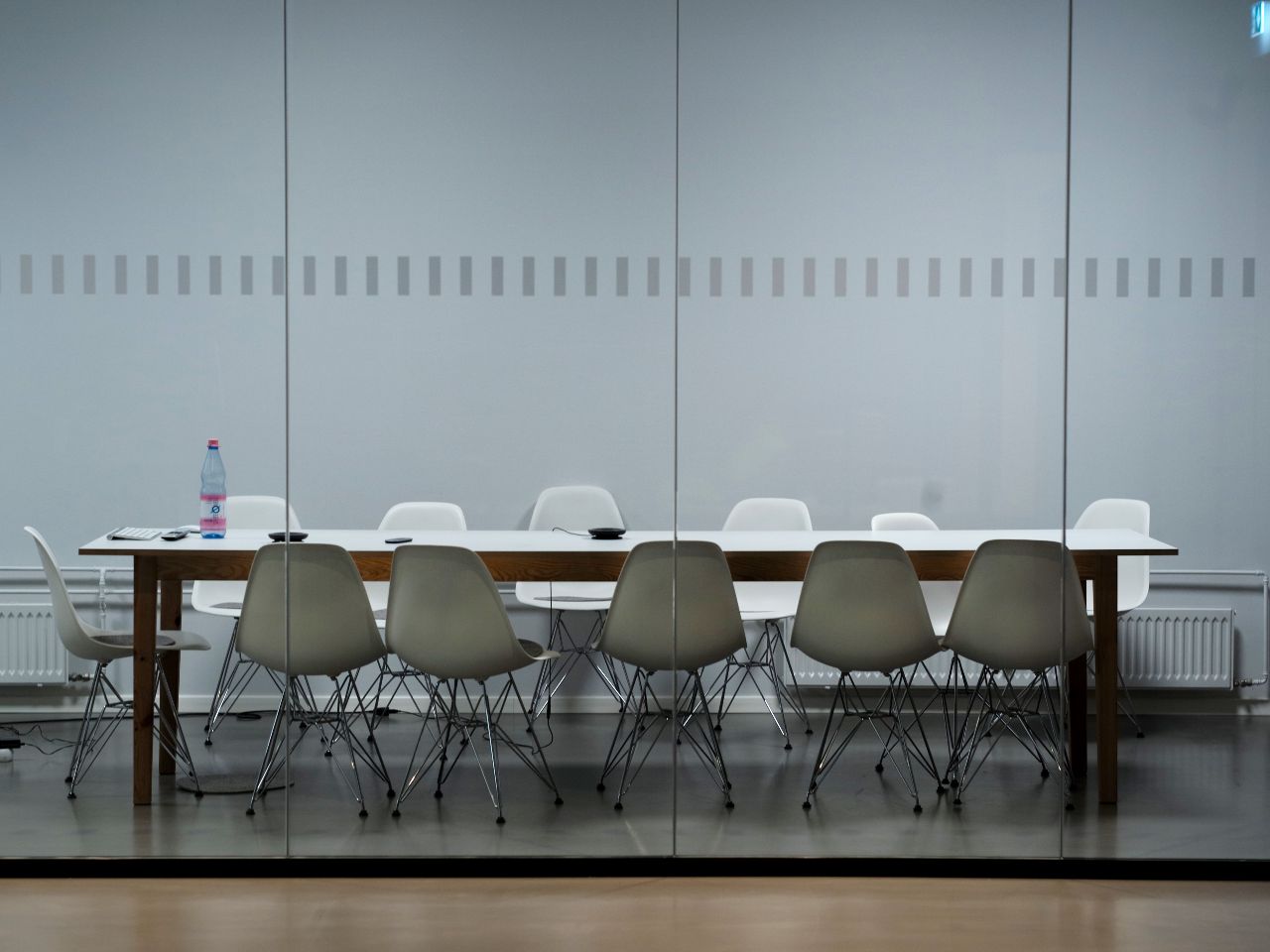 Government positions possess a valuable quality: a meaningful job experience. Eighty-four percent of The NES respondents feel positive about working for local government, and 86 percent said their values align with their work.

But meaning isn’t enough with all the stress that comes along with government careers. Brunette and Holifield say local governments need to embrace change if they want to retain high-performing staff members and survive the Great Resignation.

“The whole system that has been based on longevity—accruing benefits over time—has been thrown out the window,” Brunette said.

It’s one reason why Holifield predicts flex scheduling and benefits are on the horizon.

Flexible scheduling is exactly what it sounds like, a life without a rigid time clock. “Flex benefits” refers to different job perks for people at different phases in their life. For instance, parental leave isn’t useful for empty nesters. But time off to take care of an aging parent is valuable.

Holifield also predicts there will be more contract work, job sharing positions, and other creative solutions. Job sharing allows two or more people to tackle the same position so they can work fewer hours. Parents with kids can continue to work and take on a carpooling shift.

Brunette points out that local governments may be able to fish from a bigger hiring pond if they embrace remote work. Rush hour isn’t so bad for staff who are not required to commute every day.

Beyond reshaping the job itself, Holifield strongly suggests local governments change the descriptions on their job postings to create more latitude.

“If you say 'must have’ [on a job posting], you’re putting artificial barriers in place, and you’re gonna shrink the pool even further,” he said.

“Having a data-driven approach to identifying problems, and understanding what’s important to folks, is valuable so you can increase that engagement before issues arise,” said co-creator of The NES and Polco’s vice president of innovation, Michelle Kobayashi. 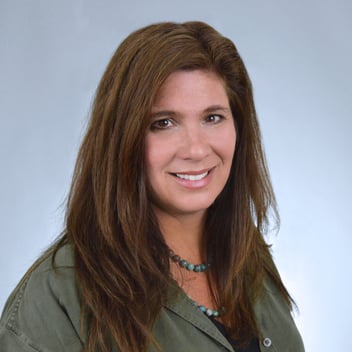 “Being preemptive instead of reactive is always better,” she said.

To successfully improve retention, local government employers must first quantify the problems turnover causes. They must then find the source of the issue and develop a tailored retention strategy.

Employee surveys like The NES are effective in collecting the necessary data to create an informed plan. The survey unveils employees' feelings towards their job–the good and the bad.

“Some people will not do employee surveys because they are so afraid of results. But just because you don't measure dissatisfaction, doesn't mean it doesn't exist,” Kobayashi said.

Kobayashi said governments often see surveys as an excuse for employees to complain or ask for more money. But they may be missing the point when money isn't the main driver behind job satisfaction in local government.

“I’ve found compensation is important, but often there are a lot of other levers that organizations can pull to increase employee engagement that doesn't rely on compensation,” Kobayashi said.

Those levers include adjusting job descriptions and allowing more overall flexibility with benefits, hours, and remote work. And considering how many government employees feel underappreciated, a little recognition could go a long way.

The NES reveals what stressors impact employees the most, so managers can find and prioritize the best solutions. The survey results can be key to helping retain and attract skilled employees.