How Local Governments Collaborate with Partners to Communicate Effectively with Residents 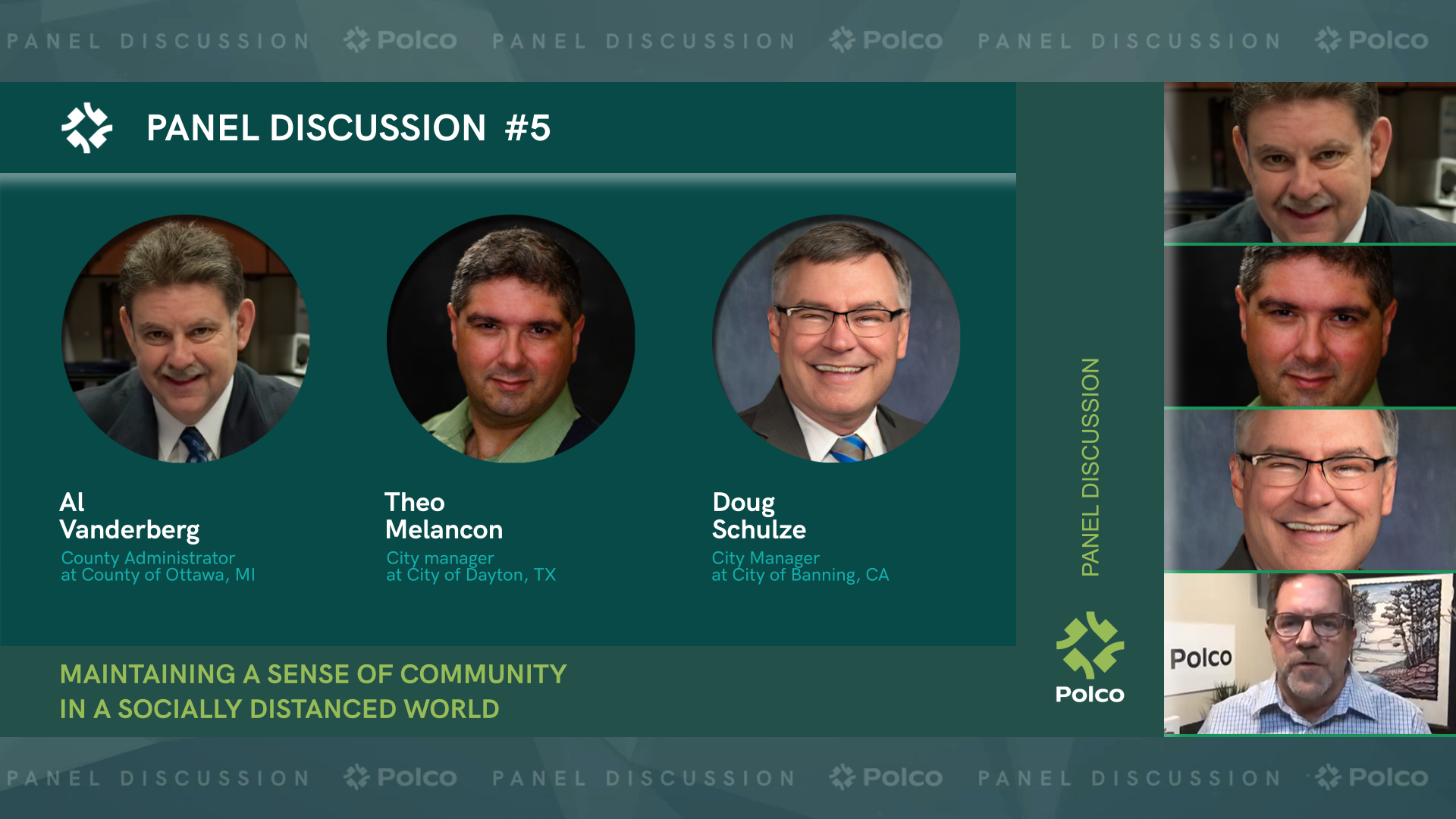 “One of our biggest challenges has been communicating... in an era when it’s hard to agree on what truth is,” said Al Vanderberg, County Administrator for Ottawa County, Michigan.

Yet during the pandemic, especially, local governments see it as their responsibility to communicate effectively and increase trust so residents do their part related to COVID-19 response and recovery.

So how do local government leaders break through the distrust and communicate successfully with their residents even during these polarizing times?

In this video, Polco’s Matt Fulton speaks with local government leaders Vanderberg, along with Theo Melancon and Doug Schulze. They discuss how they collaborate with partners, adjust outreach, and measure impact to better connect with their residents.

All three local government leaders have been thoughtful in how to communicate with residents across ideological and cultural differences during the pandemic.

Ottawa County, Michigan is conservative, yet the state has a liberal governor. Many residents opposed restrictions enacted by the Governor during COVID-19. In addition, over 30% of the population is Hispanic, a demographic that has been disproportionately affected by the pandemic.

All three leaders find partnerships to be essential in effective communication with residents during the pandemic.

All three communities work with the local hospital and multiple levels of government to provide consistent messages to residents.

“If the county judge is saying something completely different from what I’m saying, it can undermine our whole situation,” said Melancon, the City Manager of Dayton, Texas.

“We focus on the parts of the message that people are in agreement on. We avoid areas where people can debate whether it’s the truth,” said Schulze, City Manager of Banning, California.

Not only do the partnerships align communications, but they also increase trust.

For example, many of the communities work with the Chamber of Commerce, School Districts, Non-profits, and Rotary Clubs to get messages out.

“Many of our partners have members that trust them more than they trust us as city government. For this reason, we work through them to get our communication out,” said Schulze.

In addition to collaborating with partners to send out unified messages, the leaders have adjusted their outreach to better connect with their residents.

They increasingly use more video, social media, and other digital communication.

But they have also decided to prioritize safe face-to-face relationships.

For example, Banning works with the Chamber of Commerce to provide food to people in need. They also reinstated Coffee with the Mayor, but in parks rather than indoors. Conversations with people and the visibility of the City staff has been invaluable in building relationships and increasing trust.

Dayton reinstated the beloved community tradition of Food Truck Fridays with modifications to support social distancing. They also went around at the beginning of the pandemic to talk with small businesses and to offer to print off takeout menus. These efforts to provide helpful services to the community have helped the City strengthen key relationships.

For the County of Ottawa, one of the key relationships they prioritize is with local units of government. The County provides services to nearby cities, such as IT, assessment, finance, and code enforcement support.

“We have relationships with our local units of government that are more like being partners or a consultant than like being another layer of government,” said Vanderberg.

Last, all three leaders measure the impact of their engagement with residents.

Multiple leaders use annual or biannual community surveys to get a snapshot of their residents’ perceptions.

In addition to this, Banning is working on a platform that will report performance on city objectives and goals.

“It’s important for residents to understand not only what we are trying to do, but also how we are performing in achieving those goals,” said Schulze.

Ottawa County uses a tool that measures public sentiment via social media to help better understand how their message is being interpreted. They have used this tool to adjust their communication multiple times.

For Dayton, during a pandemic especially, resident behavior is one key metric they are using to judge their success. The community set up lots of opportunities for residents to engage with City services electronically. They are very interested in how many residents are using the new online tools.

“One key thing I ask to see how successful we are is: are we changing behaviors? Are residents being safe?” said Melancon.

Learn more through Polco’s website about other ideas for effective communication with residents.

Allocating ARPA Funds? How Engaging Your Community Will Help