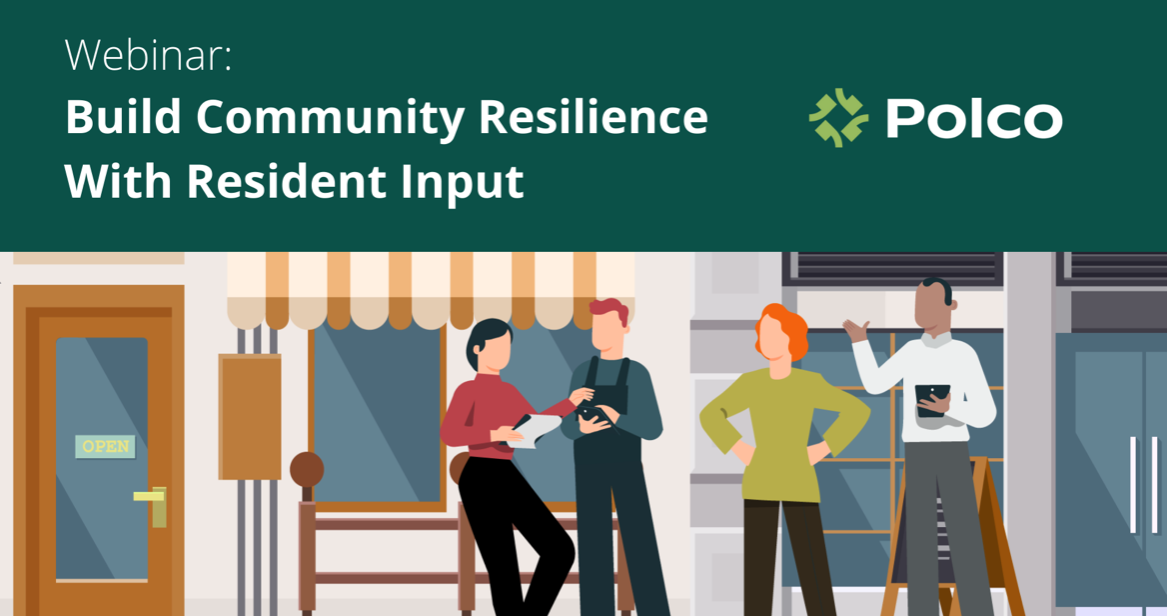 Government officials don’t have a magic crystal ball, but they can prepare for unforeseen challenges with resident insight.

Social and environmental issues such as Covid, natural disasters, civil unrest, unemployment, and economic struggles landed major blows to communities across the nation over the past few years. But forward-thinking local governments that include resident feedback in decision-making often recover faster and recover stronger.

Learn how local governments build trust and strength through resident feedback with insight from Lisa Brown, Strategy and Performance Manager from Rock Hill, South Carolina, and Mike Sable, Assistant City Manager for Bloomington, Minnesota. They share how they use local feedback to put policies in place that create a more resilient community in a changing world.

We also hear from Matt Fulton and Angelica Wedell of Polco. They discuss best practices in resident engagement.

Survey data is the basis for Rock Hill’s Strategic Plan. The City conducts The National Community Survey, as well as a business survey once every three years. This data along with feedback from community meetings and old-school phone call outreach  guides the strategic plan and budget. Like the surveys, officials revisit strategic planning  on a three-year cycle. They reevaluate budgets on a two-year cycle.

“Every three years for the survey has worked really well to have time to digest and come up with actions,” Brown said “We really like the benchmarks from The NCS and to see how we compare to other communities across the country.”

Bloomington also consistently engages  residents as part of the strategic planning process, and has administered the NCS since 2012.

“As a new staff person, I immediately had a baseline from which I could learn from since we had data from every year since 2012,” Sable said.

As part of the planning cycle, Bloomington leaders create a data book to capture a snapshot of the current state of the City. From that data, residents, staff, and elected officials develop the next iteration of the Strategic Plan. From there, the leaders invite a different subset of residents to offer advice on specific strategies and tactics. They partner with the City’s Research team to develop measures of success.

Build Trust On The Front-End

Both Rock Hill and Bloomington planners say it’s worthwhile to build trust on the front-end before crises happen.

“After the murder of George Floyd nearby, we were grappling as a community with police-community relationships. Having our engagement system in place that we could quickly lean on was really important,” Sable said.

Building trust early on prepared Bloomington leaders to pursue a local sales tax and $150 million in capital investments as well.

“In any City that is a big ask. But because we did the trust-building work ahead of time, the residents have a sense that this will position us for success in the future,” Sable said. “Investment on the front-end makes back-end investment easier.”

Transparent Communication and Readiness To Adapt

Transparent communication, readiness to adapt, follow-through, simplifying processes, and valuing employees are other trust-building strategies Bloomington and Rock Hill use.

Both Rock Hill and Bloomington fell short of some metrics identified in their strategic plans because of Covid impact, but openly communicated why they didn’t meet these targets.

“That transparency to share where we fell short of metrics and why, and showing up with the desire to do great work creates an opportunity for The Council to be more supportive of next efforts,” Sable said.

Both Cities adapt their plans frequently to reflect changing conditions.

“The strategic plan is a living document," Brown said “You may not hit the targets, but you are still working towards the overall outcomes. It’s ok to tweak the plan.”

Follow-through is another important strategy that contributes to resilience in Rock Hill and Bloomington.

Brown learned an important lesson in follow-through when she met a resident who was still angry from a 35-year-old failed promise. A former government leader said they would build a playground in the resident’s  neighborhood, but never did.

“If we say we are going to do something, we have to do it. If you stay committed to what you say you’ll do, it reinforces the notion that we are all working together on behalf of the city,” Brown said.

Follow-through is one of the key reasons Rock Hill commits itself to their regular data and strategic planning routine, even during difficult times such as Covid.

“It’s so important to build a system for how you get feedback from residents and stick with it. It does not need to be a grand plan. You just have to start,”Sable said.

In Rock Hill, residents indicated they were unhappy with code enforcement, according to The NCS.

Officials found a lot of success in improving code enforcement through simplifying processes and communication. They sent short letters to residents with graphics to explain the purpose behind code enforcement. In the past, they sent lengthy manuals. They sent inspectors to drive every street of the City, but told them to offer warnings before handing out tickets. The City started a community toolshed to provide residents with what they needed to maintain their yards.

“We took a step back and imagined what it would be like to talk with our grandmas about code enforcement,” Brown said. “It helped us to think about how to make a process that is easy. If the process is overly cumbersome, no one will go through it.”

Both Rock Hill and Bloomington know that their frontline employees will be important players in building trust with the community.

“Our public sees custodians or the road crew more than anyone else, so it’s important to equip our staff to tell the City’s story and help them understand how their work impacts the community,” Sable said.

Employees are a valuable asset in Rock Hill as well. In addition to the consistent surveying, the team participates in relationship-building such as a yearly lunch for employees.

“The goal is for employees to understand they are part of something bigger and to advocate for your Strategic Plan,” Brown said.

Question: “Resiliency includes methods of inclusion of a diversity of residents' and businesses' voices, consistently, not just in emergency scenarios. Could any of the presenters speak to how their local governments have previously implemented engagement along these lines and any new criteria that was developed to capture those voices?”

Speaker Lisa Brown, Director of Strategy Management from the City of Rock Hill, South Carolina, answers: “Absolutely, diversity of resident and business voices are important in making sure that there is a consistent feedback loop.

As I mentioned during the webinar, this is really about consistent relationship building – not just through formal surveys and formal focus groups, but through regular interactions.

For us, this is having city staff present at every neighborhood meeting, business association/corridor meetings, and ongoing communication and dialogue. So much of this continued communication is a two-way street, sending out information about upcoming community events that we are hosting – and showing up to events and efforts that the community is putting on outside of City efforts. It is also really about following through with what we say we will do – words followed up with action.”

If you would like more info on The National Community Survey, visit info.polco.us/the-national-employee-survey.

Building a Stronger Police Force With Help From Your Residents