How Avondale’s Parks Became a Point of Pride

The recession of 2009 was not a great time for Avondale, Arizona’s parks and community gatherings. City leaders reduced park maintenance and canceled most community-sponsored events in an effort to balance their budget.

But, by 2016, The National Community Survey (The NCS) revealed residents were longing again for beautiful places for their kids to play and for the celebrations that brought the community together.

“Our residents pinpointed items of importance in the 2016 National Community Survey that they valued, and the Avondale City Council and executive leadership of the organization listened and responded,” said Gina Montes, Assistant City Manager.

In less than one year, City recreation crews transformed Avondale’s parks to be a point of pride.

Avondale regularly conducts The NCS to gather feedback from community members. Residents felt parks and recreation opportunities significantly improved between 2016 and 2018 according to The NCS.

“Our community was able to see, touch, and experience improvements and changes to facilities, amenities and programs that were requested from the previous citizens survey just two years earlier,” Montes said. 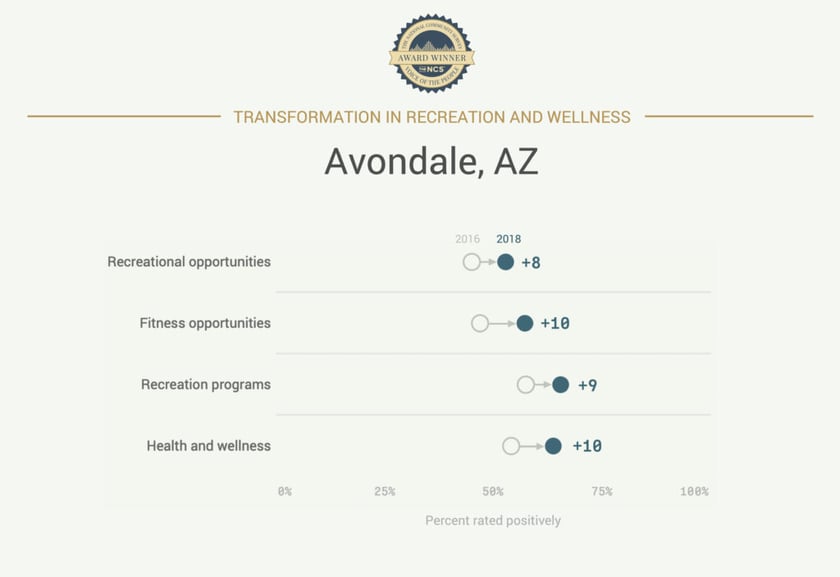 Because of this work, Avondale was recognized  with a 2019 Voice of the People Award for Transformation in Recreation and Wellness. This is the only national award that honors local governments based on feedback from residents. The award is presented by Polco / National Research Center (NRC) and the International City & County Management Association (ICMA). This award acknowledges local governments that make significant improvements on The NCS ratings and that take the best actions on behalf of their communities.

The Council dedicated $3.5 million to transform a regional sports park into a more family-friendly place. They converted sports fields to splash parks, playgrounds, and picnicking areas and created more public spaces for families to gather and recreate.

Since the initial $3.5 million investment, City Council has funded numerous other projects including playground replacements, safety and security lighting, picnic shelter and park amenity replacements, renovations to basketball courts, and the completion of a second regional park renovation.

In total the City has spent more than $7 million dollars in repairs over the past three years.

In addition to the many improvements made throughout the park’s system, the number of special events hosted by Avondale has doubled since 2015. Many of these events are now delivered directly in neighborhood parks.

By converting maintenance to in-house staff, the response time for park cleanliness, restroom cleanliness, and playground repairs has improved drastically.

“There is a newborn sense of pride by the Avondale employees to make their parks clean, green and safe,” said Montes.

Avondale plans to keep up the momentum they have established in transforming recreation and wellness opportunities.

First, the City has established a program to dedicate financial resources to replace and repair aging infrastructure.

Second, Avondale’s leaders have updated the position descriptions for several key Parks and Recreation positions to recruit and retain professional level staff nationwide. At the same time, the City has been able to retain experienced employees by providing competitive salaries.

Last, the Avondale City Council is currently evaluating whether to ask voters if they are willing to slightly increase the current sales tax rate for maintaining and improving the parks. If the question is placed on the ballot and approved by the voters, it will generate approximately $4.5M annually over a 20-year period.