How Battle Creek Transformed Its Recycling and Drinking Water Systems

Battle Creek, Michigan improves quality of life by helping residents better understand the technology and the team behind city services.

Many cities invest in technology to improve public services. But, not all communicate clearly to help residents understand the upgrades.

“We believe a significant reason for our improved natural environment ratings is our neighbors achieving a better understanding of how these city services work, and who on our team performs those services,” said Jessica VanderKolk, Communications Manager. “We release more information than the city ever has, through more channels than ever. We also place our employees in front of the public – in strategic, positive interactions – more than ever before.”

The City of Battle Creek regularly conducts The National Community Survey (The NCS) to gather feedback from community members. According to the survey, resident satisfaction with recycling and drinking water increased significantly between 2015 and 2018. 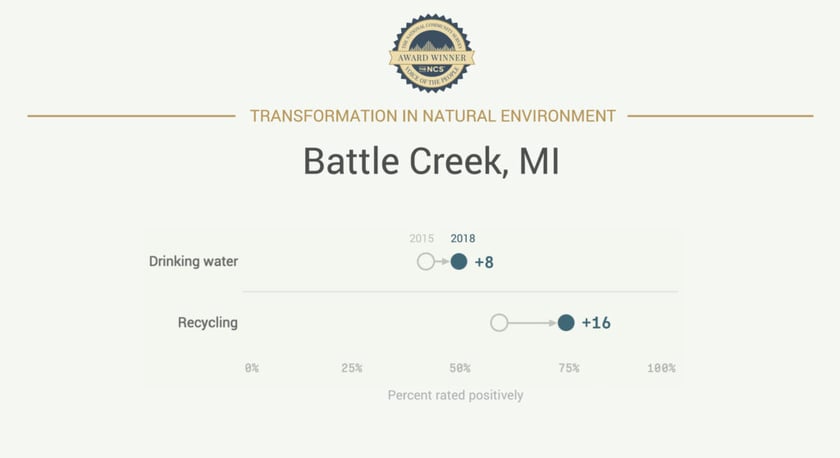 “As a team, we work incredibly hard on our processes, the language we use to explain those processes, and hearing the feedback we receive. It takes the entire staff to make this work, and we believe we have made incredible progress over the last few years,” said VanderKolk.

These efforts have been recognized with a 2019 Voice of the People Award for transformation of the Natural Environment. This is the only national award that honors local governments based on feedback from residents. The award is presented by Polco/National Research Center (NRC) and the International City & County Management Association (ICMA). This award acknowledges local governments that make significant improvements on The NCS and that take the best actions on behalf of their communities.

As a first step in its transformation, Battle Creek’s leaders focused on implementing new technologies.

In 2016, City leaders switched from small, open-top recycling boxes to 96-gallon wheeled carts for every household. This increases the capacity for each home to recycle.

Also, starting in 2016 the City replaced all of its 18,000 water meter data transmitted devices. This allows the city to collect water meter readings via transmitted signals, contributing to more accurate billing and better customer service.

Battle Creek’s leaders know it isn’t enough to invest in technologies to improve services. They know they also need to help residents to understand the changes.

For example, when launching the new recycling carts,  they printed and delivered written instructions in multiple languages. They offered multiple open houses at different times. They posted videos and articles in social media and local media outlets. And, they responded to questions on Nextdoor. Between 2016 and 2017, membership on Nextdoor in Battle Creek increased by 47%. 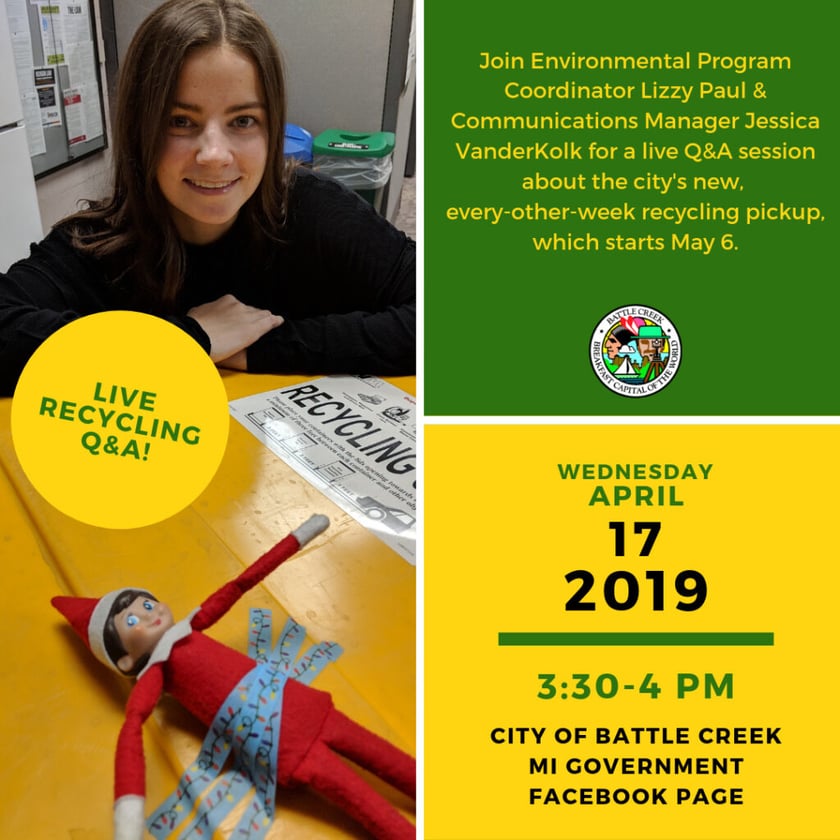 These improvements made a positive impact quickly. The new haulers collected 85 more tons of recycling in 2016 than in 2015.

City leaders focus on communication improvements related to the water system, as well. As a result, the water team can send key updates to residents. Residents can sign up for these notifications by email and/or text.

In 2016, the Department of Public Works began featuring photos, videos, and stories from team members during National Public Works Week in May. 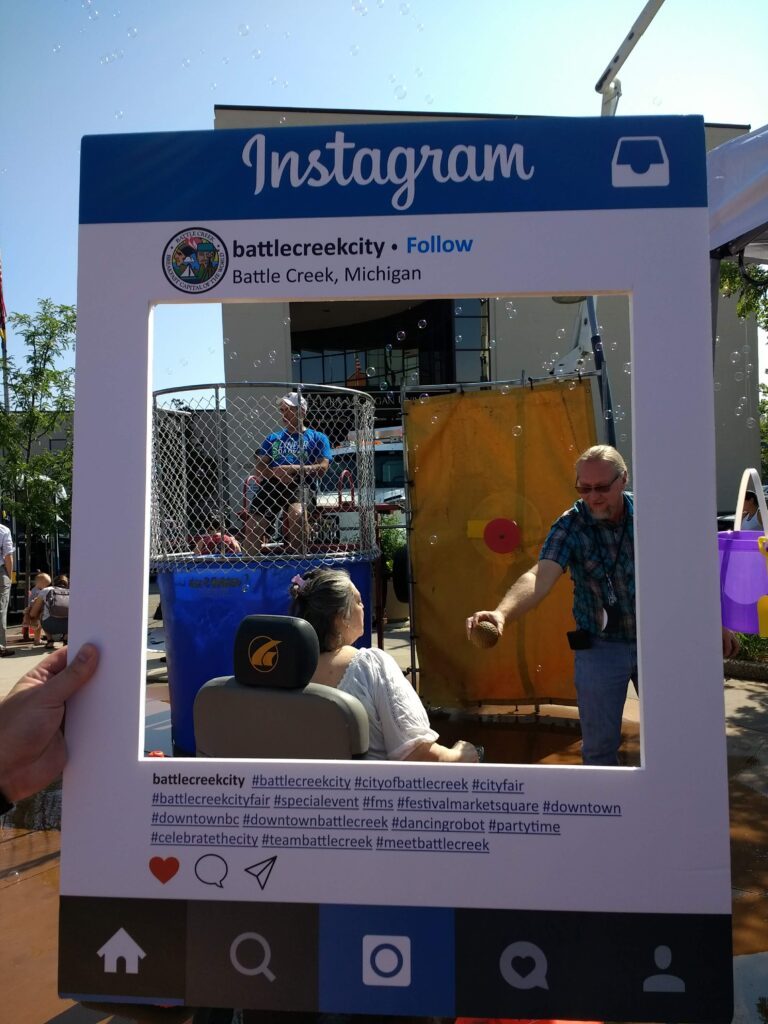 Because of its recent efforts to improve its recycling and water systems, the Public Works Department was able to deal swiftly and proactively when the City encountered two recent challenges.

This crisis stretched community leaders, leading them to use Facebook Live to broadcast press conferences for the first time and to set up a call-in information hotline in Spanish and English.

Public Service leaders noticed the problem immediately. Within one hour, they shut off the water valves, isolated the break, and issued a boil water advisory to all water customers. An hour later, the City held a press conference.

Battle Creek’s leaders are eager to continue to improve the City’s ability to engage all residents.

They are working on a Mobile City Hall concept. This idea will take small city teams into neighborhoods to help residents vote, pay utility bills online, and engage about what matters most to them.

City staff continue to build relationships with the Spanish-speaking and Burmese communities. City leaders recently attended a large fundraising event at their Latino support organization. And, interpreters will come to this year’s City Fair.

“We anticipate taking more steps the rest of this year, and beyond. We will continue to strive for the goal of reaching as many neighbors as we can to engage them, hear them, and serve them well,” said VanderKolk. 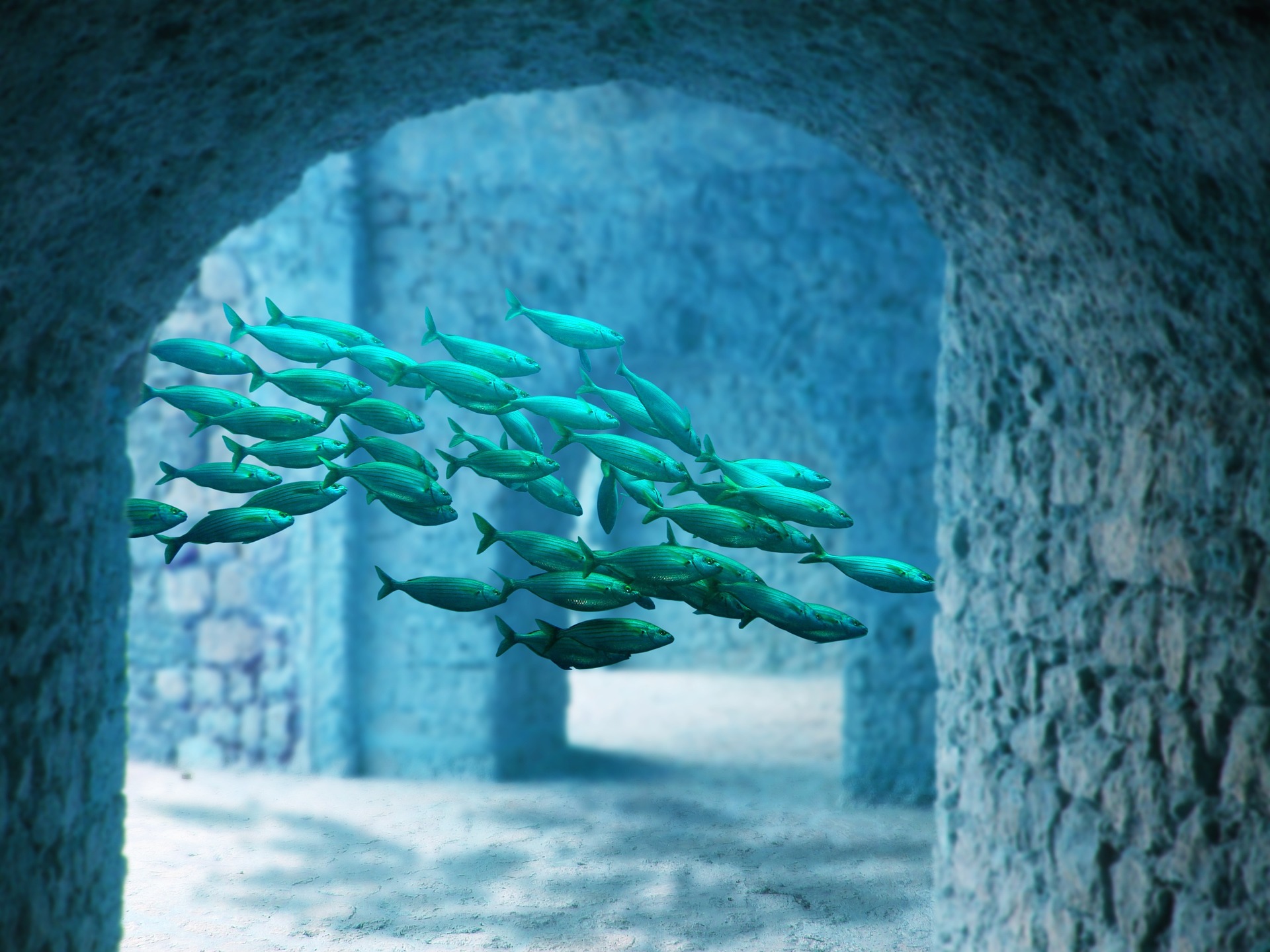 December 9, 2020 4 min read
At Ease with Uncertainty: Cultivating Motivation and Focus at Work

At Ease with Uncertainty: Cultivating Motivation and Focus at Work