This case study is part of our Voice of the People Award series. Most VOP winners are selected based on their results on The National Community Survey (The NCS), a resident feedback assessment that focuses on the foundations that create a high quality of life. Others demonstrate excellence in online engagement.

Messaging is a hurdle that all local governments face. Low ratings for messaging appear consistently on The NCS results across the board. Yet the City of Bondurant, Iowa, was able to effectively communicate with their residents throughout the height of Covid, when misinformation and disinformation were running rampant.  The City’s success led to a Voice of the People Award for Excellence in Covid-19 Engagement.

Bondurant had the right foundations in place. The City went through a rebrand just before the pandemic, and with the new image came a new, easily-navigable website.

“We were lucky the rebrand came before Covid because it allowed us to do things virtually,” said Nicole Van Houten, Communications and Events Specialist. “If we didn't have those tools already in the works, it would have been a lot more challenging.”

Van Houten had just started her communications role for the City when Covid struck. Sifting through what information to share with the public was challenging, especially with differing opinions. She used verified resources, like the CDC, to share information.

To understand how residents were coping, Van Houten posted multiple surveys on the Polco platform. The City of Bondurant previously used Polco for benchmarking surveys, but Covid prompted use of the online tool.

“We originally used Survey Monkey, but we did find that Polco had a more robust system,” Van Houten said. “It has all the data points that we needed to understand the demographics that we were reaching.”

In addition to online outreach, the City used grant money to purchase hundreds of hotspots that could be checked out at the library for residents who did not have internet access. 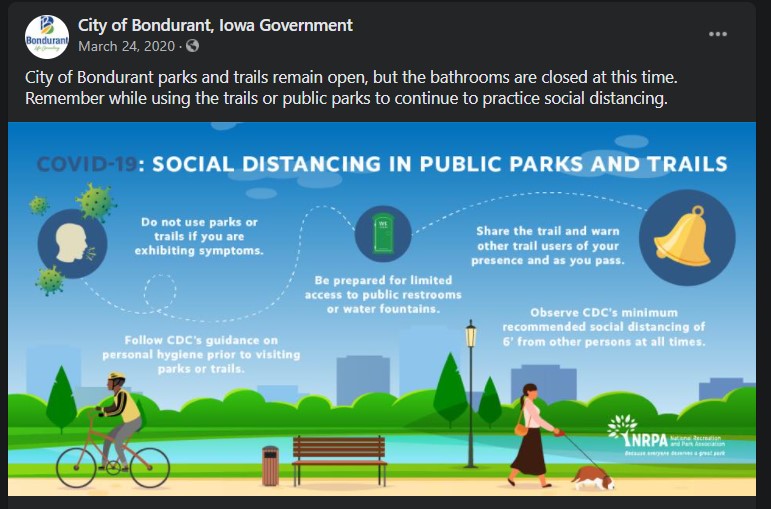 Communicating in an Emergency

The Covid communication challenge prepared Van Houten for other emergency situations that were around the corner. ​​In the past five years,  Bondurant was hit by three natural disasters, including a derecho, serious flooding, and an EF2-rated tornado. Homes and businesses were destroyed.

“Those two natural disasters were so close together. We didn't have an opportunity to recover from the flooding, then all of a sudden we got hit by a tornado,” Van Houten said.

Luckily, the City of 7,821 people is close-knit and willing to help each other out.

“We saw all neighbors from all parts of the town come out and come together to fill sandbags, help people pull carpet out of their [flooded] basement, and throw away debris,” she said.

But all that energy meant the City needed to get organized quickly. Officials had to put together what needed to be done and initiate a distribution list so volunteers knew where to go.

The text alerts that were implemented during Covid came in handy for fast messaging during the disasters. (And Van Houten still uses the text alerts regularly for construction, road closures, and snow ordinances.)

Van Houten says the community has shown an overwhelming amount of support for one another by coming together to overcome challenges. Bondurant’s resilience in the face of unexpected difficulties sets an example for local governments around the country. The City’s efforts exemplify the power of clear communication and collaboration to move forward together.