The third annual Leadership Trailblazer Award, presented by the League of Women in Government and Polco/National Research Center, seeks to honor an accomplished woman leader who also empowers others.

One thing the pandemic has taught us is that leadership matters - especially in a crisis.

According to a study by National Research Center, Inc. (NRC) at Polco, the percent of female local government senior managers rose from 34% to 38% between 2013 and 2019. But, most women and men who participated in the survey agree that women have more barriers to career advancement than men. Clearly, as a profession, we have moved the needle in some ways, but we still have a long way to go.

One way to encourage women in local government leadership positions is through recognizing those who are trailblazers in the profession. The League and Polco/ National Research Center, Inc. (NRC) are proud to announce the third annual Leadership Trailblazer Award. This award recognizes an accomplished woman who is a leader in the local government profession and has inspired other women to achieve as well.

“In this time of crisis, local government leaders nationwide are pulling up their sleeves, showing up, and rising to occasion of serving their communities,” said Damema Mann,  Director of National Engagement for Polco/NRC. “The Leadership Trailblazer Award seeks to honor a woman who has done important work for her community and important work for elevating other women as well.” 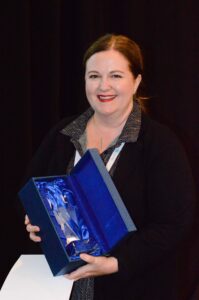 This year’s winner will be inducted into the League of Women in Government Hall of Fame alongside Lori Sassoon, Deputy City Manager of Rancho Cucamonga, California, who received the honor in 2019.

“I’m feeling thankful for all the talented and caring people I’ve gotten to know in public service over the years, and how we support one another,” said Sassoon, referring to the Leadership Trailblazer Award’s role in honoring leaders who lift up other women.

Nominations for this award are submitted by local government professionals who would like to see a deserving colleague recognized on a national scale. A panel of judges from the League and Polco/NRC will review each nomination and select the final winner.

"In order to achieve gender balance in local government, we need women who will mentor, sponsor, support, and lift up other women," said Pamela Antil, Assistant City Administrator of Santa Barbara, California and League CAO.

"We hope the award will not only spotlight the nominees and winner but also honor the valuable work of all women in our profession," added Antil.

The 2020 Leadership Trailblazer Award will be presented at Unite: A Digital Event in conjunction with the International City/County Management Association (ICMA) Annual Conference to be held September 23-26, 2020.