Go Where They Are, Not Where You Want Them to Be 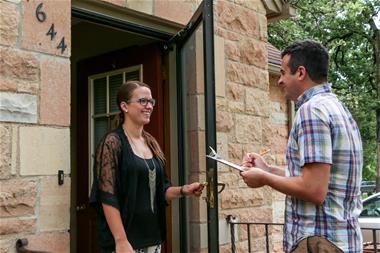 The City of Albert Lea conducted a survey of 500 residents in 2015. The survey asked respondents to answer 149 questions, all about life in Albert Lea. National Research Center, Inc. (NRC), the organization that conducted The National Citizen Survey™ (The NCS™), provided a breakdown of the results in a variety of formats, including by ward. The City scored the weakest in the fifth and sixth wards. 30{7d2d4cb14c544bbeb3cd4763dc2b1aa4e79f5bb51403ad6dac1e84ac9d980b0d} of those who responded believed the City had a positive image or reputation. 18{7d2d4cb14c544bbeb3cd4763dc2b1aa4e79f5bb51403ad6dac1e84ac9d980b0d} had confidence in city government.

I found these numbers troubling, as did other city officials. I came to Albert Lea because I think it is a great place to live and work. I wondered about how the City communicated. What was the disconnect between what I saw and how the residents felt?

I took stock of outreach efforts. The City printed a newsletter on a bi-monthly basis that was included in a magazine with grocery store circulars. If one did not look through that, it was tossed in the recycling bin. I realized then that the Albert Lea Tribune and gossipy coffee shop talk were driving the conversations, and we weren’t in on them.

We decided to change this, looking to contact residents in every way possible. Instead of a bi-monthly newsletter that many did not see, we printed and inserted it with the 6,800 water bills mailed each month. This ensured that we were reaching people and doing so twice as frequently.

We also changed the way that we used social media, which had a dramatic impact. In order to improve the city’s image, we showed all of the natural beauty of the “Land Between the Lakes,” which is Albert Lea’s nickname. Whenever walking, I’d snap a photo of a sunset, winter beauty or even the ducks that congregate outside the library when it opens. In a town filled with nostalgia, we posted old photos from our archives on Throwback Thursday. We also developed another themed day, #FireFighterFriday, profiling a firefighter each week. After that completed, we took on #FishFriday, asking residents to send us photos of their catches. One photo garnered 6,000 views. Our following on Facebook has nearly increased by double in a year. We established and developed an e-newsletter as well, sent on a weekly basis, which is received by over 700 people. All of this was to ensure that people knew what we were doing. I often repeated that, “If we don’t tell people what we’re doing, they think we’re doing nothing.”

There was now an infrastructure designed to meet residents at their mailbox, email box and on their mobile phones (78{7d2d4cb14c544bbeb3cd4763dc2b1aa4e79f5bb51403ad6dac1e84ac9d980b0d} of our Facebook following views us on their smartphones). Recognizing that some Albert Leans were not online, I also wanted to take the organic approach, meeting people at their doors to find out why residents felt the way they did.

I created a form used for service requests and an email newsletter sign-up sheet. With that, the Mayor, City Manager and I began canvassing the 5th ward. We started in a higher-density portion of the ward, and began knocking on doors from 5 to 7 p.m., hypothesizing that we could reach more people at that time. When a resident opened the door, we’d say something like, “Good afternoon! I’m the Assistant City Manager in Albert Lea. Just wanted to find out how things were going in the neighborhood.” Disappointingly, we did not unearth any overarching theme or find out exactly why residents felt the way they did. Rather, what did happen is often residents would incredulously smile, stating, “Nothing like this has been done before.” Should conversations evolve, we stated why we were doing this and asked if anything could be done to improve the neighborhood. Most people did not immediately have anything that needed to be remedied, but rather would call a couple days later saying, “You asked me to call if I thought of anything.”

A person-to-person connection in a town of 18,000 people is meaningful. Moreover, the action itself demonstrates that staff and elected officials want to address matters and improve the quality of life for residents. We sought to repair civic trust and by encouraging residents to sign up for our emails or follow us on Facebook, we could continue to engage them.

There seems to have been a disconnect between those were surveyed and those we canvassed. There was no overarching theme or sentiment about the city. Rather, most residents were simply happy to see that we wanted to address concerns and appreciated the effort. Most of the concerns expressed at the door or in subsequent phone calls revolved around infrastructure – a curb in need of repair or a bump in the driveway. Regardless of whether those items could be repaired, our City Manager and Public Works Director recognized the importance of simply responding.

When we finished the 5th ward, we knocked on the doors of 533 households. Over 30 service requests were generated and closed. Of course, the only way to measure improvement would be to conduct another survey, but that is not scheduled until 2018. It is our sincere hope that we have done as much as we can to improve the City’s image and their opinions on city government.

I would recommend this “All-of-the-above” approach to other communities. We are continuing to expand it, hosting satellite city halls at grocery stores and other high-traffic locations within the city. We are demonstrating that we welcome input, want to restore confidence in government and bolster the City’s image.

This article originally appeared on the Alliance for Innovation website transform.gov.