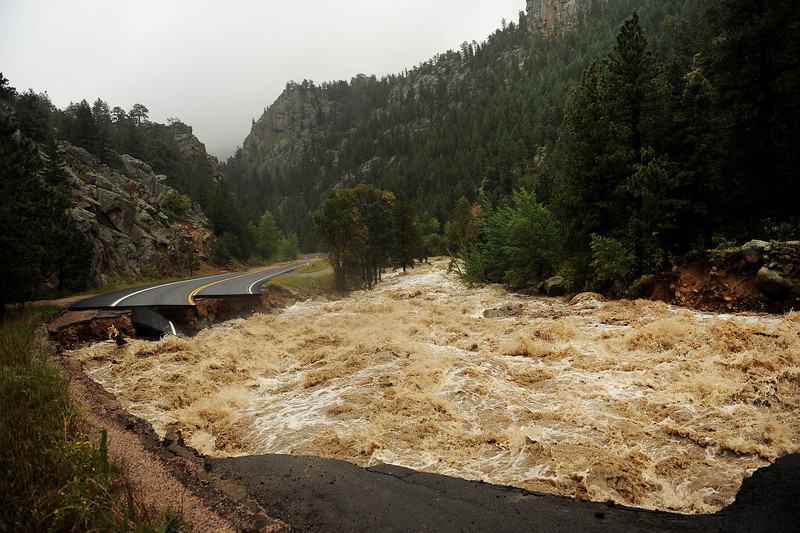 Like many in Boulder, NRC is just beginning to surface from the floods that tore apart much of Colorado last week. While our home office came through with little more than a flooded basement and some drips in the ceiling, many of our staff members have been impacted in bigger ways. The NCS Project Manager Damema Mann and her husband were evacuated from Lyons on Sunday after a harrowing weekend watching the waters rise without electricity, water, or gas. An arroyo in the backyard of NRC President Tom Miller transformed into a raging river overnight, seeping into his basement and destroying the yard and much of the street. Senior Project Manager Sonya Wytinck's basement was flooded as well, prompting an entire weekend of cleanup. In typical NRC fashion, many of our staffers spent the weekend assisting neighbors, relatives, and strangers in moving mud or debris or drying out various soggy items.

NRC President Tom Miller summed up his experiences during the flood as a reflection on the power of community - an ideal that NRC is clearly committed to. His thoughts are included below.

Hwy 7 is completely blown out from the South St. Vrain river as a torrent of raging water rips through it about 12 miles west of Lyons, CO. along Highway 7 on September 12, 2013. (Photo By Helen H. Richardson/ The Denver Post)

The Historic Colorado Flood from One Lucky Neighborhood

Beyond the rainbows rotating across my living room, the double blade army helicopter heads low up Left Hand Canyon. The sun has made a sneak appearance for the first time in a week, powering the solar gizmo on my window and helping everyone on my block breathe easier. But many of the people still being air evac’d from Jamestown and Lyons have lost everything and a brief bit of sun is unlikely to settle their minds just yet.  I’d always talked the right talk about community engagement and the power and wisdom of the masses, but until recovery began after rains of “Biblical proportions” I didn’t understand my own words.

We’ve been losing this game of chicken with the sun because after every respite from rain, the clouds build and explode again and again.  They say parts of Boulder received over 23 inches of rain in 6 days. Average annual rain fall is short of 19 inches. But to me, it seems the rain was packed mostly into the night when the boulders, clunking into each other under the rapids, sound like haunting footsteps as the creek-turned-river unlocks that vault of fears that helps us hold things together. At night, with the rain falling, head lamps and porch lights synch with the drops to create an impenetrable mirror reflecting only our imaginations. Has the river finally arrived at the back door?

That was Thursday. On Friday night, in my neighborhood in north Boulder, the water that has been rising from the ground comes crashing in through window wells to the west. The arroyo behind us, typically dry in September, is running 100 feet wide and finally has had enough of us. It is a hit and run. The average wall of mud on this side of the block is 5 feet into basements. One window blown out in every house is all it takes to ruin carpets, furniture, mementos and miscellaneous crap that should have been tossed years ago.

What shook loose from the soggy carpets is a deluge of neighbors, friends, colleagues and strangers who don’t have to do anything yet are compelled by the feeling that they have to do something. Buddies from childhood send well wishes as do clients from across the country, with subject heads like “Are you OK?”, “Thinking of you,” “Hope all is well for you and your families.” Guys with trucks, gloves, shovels come by. People on bike rides, touring the devastation, dismount and grab carpet cutters and buckets.  Few want to leave a name or mailing address because all they need is a handshake and a chance to give what they know they’d get.

Neighbors on the dry side of the street feed those on the flood side. Little kids from nowhere show up at the door with handmade bags of cookies labeled, “It’s going to get better.” Pizzas are ordered, lemonade is iced. Banana bread is fired up and delivered from another neighborhood. Trash bags are distributed, advice is given about drowned water heaters and ruined boilers. Stories are shared of when the water broke through. Water to the ceilings of basements. Electricity and gas dead. Mud where bedrooms used to be. But no competition for “worst in the neighborhood.”  The historic flooding passes for bad luck, but everyone knows we have it good. We have our lives and we have each other.

Previous Story
← NRC Has Gone to the Dogs!
Next Story
2013 Voice of the People Award Recipients →