Protests against race-related police violence are demanding law enforcement reform across the nation. The Black Lives Matter movement highlights a sizable disparity between how black and white Americans view and experience the police presence in their communities.

So what does survey research say about how ratings of law enforcement differ between races? And what about how safe residents feel in their communities and public priorities for police work?

Perhaps surprisingly, most residents rate police services in their community very highly, according to benchmark results from The National Police Services Survey (The NPSS).

Community surveys like The NPSS help bring diverse voices into the decision-making process. “It’s important for people [to be able] to influence policies and practices based on their own experiences,” said Darrel Stephens, Former Executive Director of the Major Cities Chiefs Association (MCCA) and Co-Director of the Bureau of Justice Assistance (BJA) Executive Session on Police Leadership (ESPL). Stephens also helped guide the creation of The NPSS.

The survey shows that more than three-fourths of residents rate the overall quality of police services positively. Also, most residents report high levels of trust in law enforcement. Almost 80 percent rate their police department positively when it comes to acting within the law, being a positive influence in the community, and being trustworthy.

Law enforcement leaders point to public trust as a pillar for community-centered policing. “If we don’t have the trust of the community, then we’re not able to do our job effectively,” said Seattle, Washington Chief of Police Carmen Best. Best is the first black woman to serve her City as Chief.

Where Resident Perceptions Differ Most

When we compare The NPSS survey results by race, however, we see some differences between white and black residents’ ratings of police. While residents of either race tend to have similar feelings about most big safety issues and priorities, black residents give much lower ratings to use of force and police trustworthiness.

The largest difference between the two groups is in the issue of appropriate use of force. More than 80 percent of white residents rate law enforcement’s use of force positively, but only half of black residents feel the same way.

There are a few other notable differences. About 40 percent of black residents consider gun violence and school safety major or moderate problems, compared to only 30 percent of white residents. Conversely, white residents are more likely to consider financial crimes against the elderly as an issue in their community.

Where Perceptions Are Most Similar

Generally, both black and white residents have very similar perceptions of safety services in their community.

Research shows similar outcomes in the way respondents feel about how police departments hold officers accountable for their actions.

Residents of both races are most likely to rate drug abuse and driving under the influence as significant issues in their community. They also have similar levels of concern with other problems, such as underage drinking, burglaries, and disorderly conduct.

Resident priorities for police are also very similar. Among the highest priority issues are school safety, drug enforcement, and working with residents to solve neighborhood problems. Both groups consider enforcement of nuisance code violations as the lowest priority. While there are no major differences, we find that black residents are slightly less likely to rate each category as a high or medium priority. This may indicate different attitudes about the roles of police in their communities.

“We know that local governments want to do right by their communities, especially when it comes to safety,” said NRC / Polco Director of Communications Angelica Wedell.

“Police leaders want and need to know how residents of different races and backgrounds see and experience law enforcement. Data like these are so important because decision-makers need that baseline understanding to know what within the organization may need change.” 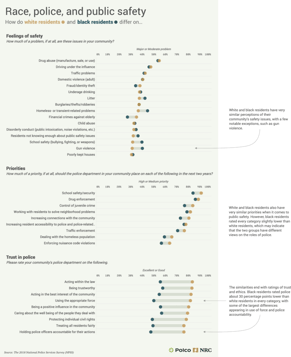 Click below to see a map of respondent locations: 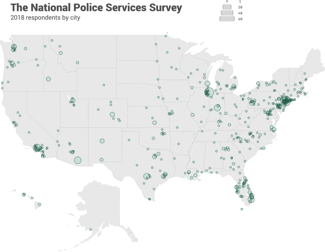 * The NPSS was administered online to a representative panel of about 2,000 United States residents in August 2018. Panel members were sent multiple invitations until the desired number of completed surveys was obtained. The survey responses were weighted by respondent tenure (rent vs. own), housing unit type (attached vs detached), race, ethnicity, gender and age within each region to ensure the results are representative of all adults across the U.S.