Loneliness in not an inevitable consequence of aging

Although roughly one-quarter of older adults surveyed in a recent administration of the Community Assessment Survey of Older Adults (CASOA) had at least a minor problem with feeling lonely or isolated, emotional well-being seems to increase with age. Older adults tend to prioritize relationships that are important to them as well as exhibit more gratitude and positivity in their daily lives. Nonetheless, communities and local governments can do much to combat feelings of loneliness among older adults (as well as other areas identified as problems).

National Research Center, Inc.’s studies of people over age 60 demonstrate that feelings of loneliness or lack of engagement can still be a problem for a significant amount of people. Of older adults responding to CASOA in Indiana, a full third (33{7d2d4cb14c544bbeb3cd4763dc2b1aa4e79f5bb51403ad6dac1e84ac9d980b0d}) of respondents report that feeling depressed is at least a minor problem. Furthermore, over half of respondents report that having their voice heard in their community is at least a minor problem, signaling some barriers to community engagement of older adults. 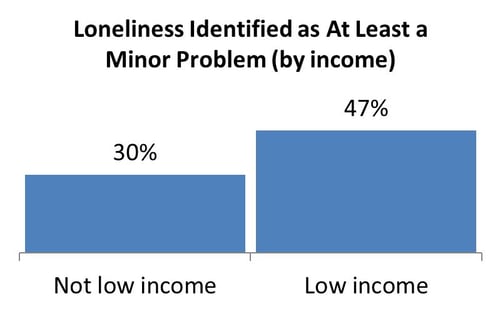 Loneliness can affect every age group, but loneliness accentuates with age and poverty. There is no single culprit to identify as the cause of loneliness; the social conditions and built environment of a community unintentionally can inhibit social interaction and accessibility.

It is in communities’ interest to facilitate more social connections, especially among older adults. Increased sociability will improve citizens’ health, outlook on life and community engagement while also boosting economic growth. As loneliness has been identified as a public health issue, government response is needed. Indeed, a response may also be needed to address older adults’ issues with feeling like their voices are heard in the community. Could giving older adults a louder voice help alleviate these feelings of loneliness?

In addition to supportive social structures, the physical environment also can be better tooled to accommodate older adults; constructing homes with universal design allows residents to age in place, not having to move out of their homes due to inaccessibility. Such a simple design change can have profound effects for the happiness and dignity of community members. An act as simple as amending design codes or encouraging universally-designed homes allows for a substantial increase in the quality of life for a large portion of the community.

Governments can help mitigate some problems of aging with better policies and programs. Most people don’t like to think about getting older, but improvements for older adults in our society will benefit everyone and we also will need those improvements for ourselves.