Cheery handshakes between colleagues, notes on paper, the smell of hot-springs, grand views of snowcapped mountains and a palpable sense of history has signified the Colorado City County Management Association (CCCMA) Winter Conference for the last two decades.  Once again, Colorado local government professionals started the new year with a trip to the century-old Hotel Colorado in Glenwood Springs to illuminate the profession they love and prepare their home-state communities for the future. 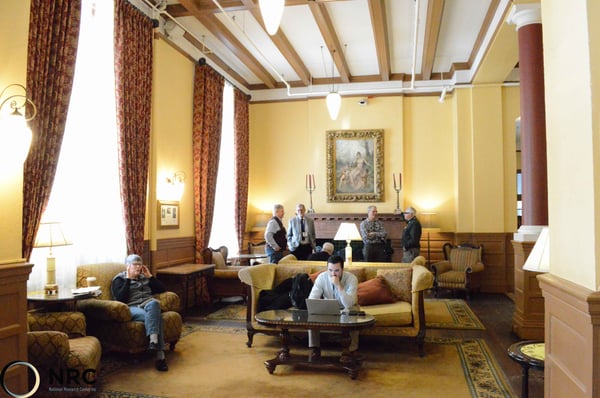 Hotel Colorado was built in 1893 and is one of the oldest hotels in the state.

Hotel Colorado has hosted the Winter Conference for more years than most attendees could count.  It’s become a tradition for many of those who come to the conference every year.  As familiar as the location has become, attendees agree that the quality sessions and engaging networking opportunities are what keeps them coming back.  “I love this conference, so I’ll go wherever it happens to be held,” said Mead Management Assistant Melissa Mata.

This year’s sessions provided actionable insight and inspiration.  Speakers presented on local government employee engagement, tactical tips and tricks, Colorado economics, motivating life journeys, small towns and more.  “I can say that this year was great,” said Trinidad Assistant to the City Manager Anna Mitchell.  “The sessions really went in depth into statistics and really got down to tactics you can use on a daily basis that I wouldn’t have thought of on my own.” 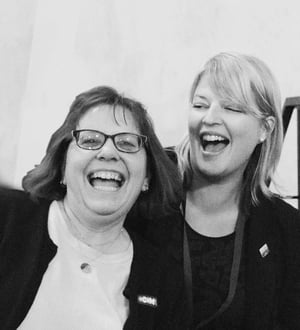 We spoke to a handful of attendees to find out what stood out to them most.

“I always really like the economic update … the fact that our economic recovery, housing activities and population growth in Colorado are just incredible.  Baby boomers are retiring, or if they’re not retiring, they go live and work wherever they want because everything is so connected now.  I don’t know what the future is going to bring, but I guess I’m just encouraged that Colorado will stay strong and economically solid,” said Dpt. of Local Affairs (DOLA) Southeastern Colorado Regional Manager Lee Merkel, who has been coming to the CCCMA conference since the beginning.

“As a young professional in my second year of government, I learned a lot from experienced managers,” said Fort Collins Graduate Management Assistant Jackson Brockway.  “I learned what some of the bumps are down the road in the future [of my career]; how to be an engaged, caring and talented manager; how to make the ethical and right decisions; and how to treat your staff well.”

“I really liked the sessions - learning from the experts and sometimes validating my own experiences. The other thing I really liked was the [presentation] by Jerry Traylor, the speaker with cerebral palsy who shared an inspiring message [about his experiences running across the country and climbing Pike’s Peak]. He was really great,” said Pitkin County Finance Director Ann Driggers.

“I feel like everyone has personal relationships with the majority of everyone in the room.  The introduction to the professional network here and how open people were to letting you in really stood out to me the most,” Aspen Management Analyst Emmanuel Hernandez said.

“The last panel discussion was awesome.  I think having that open-dialogue was a great way to end the conference,” said Dick Eason, former Elizabeth Town Administrator.

“Employee Engagement was a really good presentation,” said Reagan Robb, Evans City Clerk.  “From the different ways we get employees engaged at the very start of on-boarding to the first impressions you leave them with.  That really spoke volumes to where we are in our own organization.  It will be really good to recap some of those lessons, go back to our cities and towns and hopefully get people excited about local government.”

“What stood out for me was the statistic that the average age of people coming into local government is 37.  That’s amazing to me because I’ve been in local government since I was 25.  I never really planned a career in local government, so I love that I’ve moved up and kept climbing that ladder.  [Most people don’t start their careers at the top.]  You have to get in on the ground floor and work your way up, for the most part, like I did,” said Pueblo West Metropolitan District Administrative Clerk Laura Savage.

“The incredible quality of content and dialogue amongst all of the different participants and speakers really stood out to me this year,” said Katherine Correll, Executive Director for Downtown Colorado, Inc. (DCI).  “I really enjoyed connecting with new people, people I’ve seen before, and the feeling of reunion when you get to catch up and see all of your peers and partners from around the state.”

“I learned there’s a whole lot more to being a town manager than I really understood. I’m from a very small town, so there are a lot more issues that managers of bigger towns deal with that I was unaware of.  I spoke to someone who is a communications officer, and I had no idea that other towns even had communications officers,” said South Fork Finance Manager Amanda Hill, who was attending the conference for the first time.

“This is my fourth time coming to this conference, and what really resonated with me is the reality that it’s not about you.  It’s about them, your community.  You have to learn what it is that bugs them and how can you show them what is beyond this point [or issue],” said Brighton Assistant City Manager Linda Bertrane-Gonzales.

Previous Story
← National Research Center, Inc. and the Transparency Initiative
Next Story
What Questions are on The National Citizen Survey? →