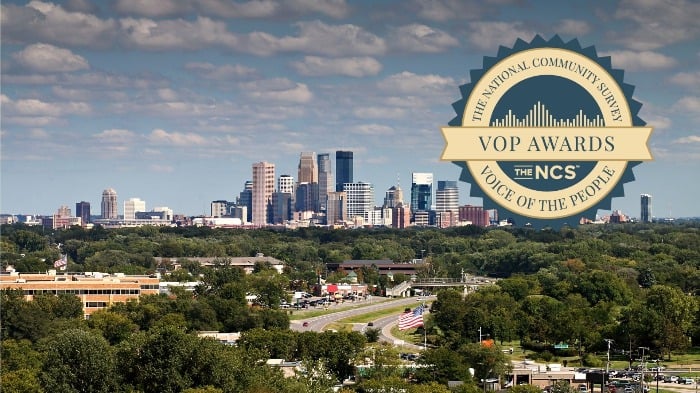 In a day with frictions between police and the neighborhoods they protect, it is uplifting to see transparency and accountability prioritized by the Plymouth Public Safety Department.

The department has come to understand that taking the time to connect with the public is vital to keeping everyone safe.

According to The National Community Survey (The NCS), this dedication allows Plymouth’s community to confidently rate their quality of life as either “good” or “excellent.” In fact, research shows that an impressive 99% of Plymouth community members are happy with the City as a place to live. And overall, the community stated that safety was indeed the top-ranking priority for the community.

Thanks to the hard work of the Plymouth Police Department, the vast majority of residents stated that they, indeed, felt safe - earning the department a 2020 Voice of the People (VOP) Award for Excellence in Safety.

These awards recognize local governments whose residents have given the highest or most improved satisfaction ratings, and that demonstrate the best actions for their communities.

According to Damema Mann, Senior Research Analyst for Polco and their National Research Center team, “the community received positive ratings from at least 9 in 10 respondents and were more favorable in Plymouth than in other communities in the U.S.” 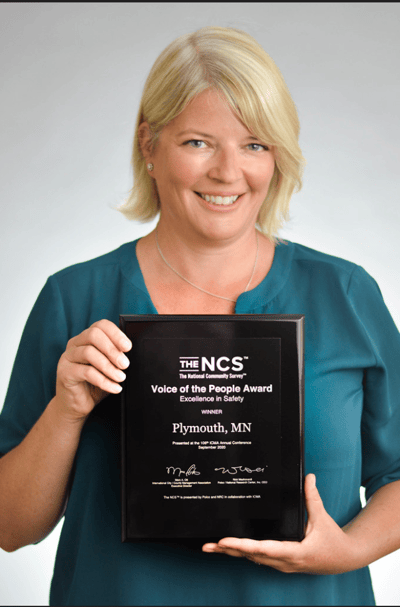 The Plymouth Police Department has a single priority:

"To provide superior protection and service by reducing crime and enhancing the quality of life expected by our community."

To accomplish this, the department expects all sworn and civilian members of the team to live by and uphold the department's core values:

Plymouth residents ranked their community significantly higher than the national average for overall “feeling of safety” within the community. They also reported that community engagement overall was satisfactory, thanks to the City’s multiple communication channels and in-person events.

The National Community Survey revealed that Plymouth residents receive most of their information from the City’s newsletter. However, the City also found that visiting the official website is another preferred method of receiving information.

“We are continually seeking to improve, engage and strengthen public trust,” said Public Safety Director/Police Chief Mike Goldstein - and they are doing just that.

And according to Mann, “9/10 respondents gave ‘excellent,’ or ‘good’ ratings to the overall quality of City services and at least three-quarters felt favorable about:

This level of community satisfaction is reflected in the resident ratings given to public safety and trust in local law enforcement.

To uphold the Plymouth Police Department’s values and foster those vital trusting relationships with the community, the department adopted the 21st Century Policing model.

This model prioritizes community engagement and police transparency to ensure the safety of everyone in the community, both residents and key governing officials.

The 6 Pillars of the 21st Century Policing Model

The 21st Century Policing Model is the first of its kind to recognize that trust between law enforcement and the people they protect and serve is vital in creating a safe and thriving community.

For those in a community to feel safe, Plymouth PD believes they must build trusting relationships. Trust and legitimacy go hand-in-hand. Both are required for the public to believe that authority figures work in the community’s best interest. This requires law enforcement to adopt a guardian mindset.

As part of building trust amongst the community, police must focus their attention on creating policies that reflect the community's standards and values–not just the department’s objectives. It also means paying careful attention to any oversights that could negatively affect various segments of the community.

To ensure these oversights don't happen, police and safety departments should collaborate with the community to develop strategies and policies that help reduce crime by improving relationships through engagement and cooperation.

Communication is crucial between the safety department and the community, so it's important to incorporate technology and social media into the mix. This not only allows for open communication between both parties, but allows for complete police transparency regarding all matters.

“The Plymouth Police Department understands the power of an informed citizenry. Consequently, it provides numerous tools so residents can obtain information and provide feedback to help solve crimes,” said Laurie Hokkanen, Administrative Services Director of the City of Plymouth.

The City utilizes several platforms, including:

These channels are used to keep the community informed of what's going on and alert residents in emergency cases. They are also used to encourage the community to reach out and communicate with the department to get all comments, questions, and concerns addressed.

Community policing focuses on intervention and prevention through problem-solving through the collaborative efforts between the Public Safety Department and local schools, social services, and other stakeholders.

These partnerships are vital in keeping the community safe and opening up essential lines of communication to ensure that residents feel safe turning to the police in times of need.

While communication is vital, it is also essential that today's officers receive the best training possible. Not only that, they require extensive, ongoing training for in-the-moment reactions as well as proper socialization to help with de-escalation in high-intensity scenarios.

It is a requirement for all sworn officers to take part in an average of 130 hours of training each year. That is approximately 10 times what the state of Minnesota mandates.

Finally, while most of the pillars of the 21st Century Policing model focus on community wellbeing, the last pillar focuses on officer wellness and safety. To perform their duties, officers need to take care of their mental, emotional, and physical health. If they don't, they cannot perform their duties and keep their comrades or residents safe.

The City’s "Check Up from the Neck Up” program requires staff to undergo health and wellness checks each year to make sure they are physically and mentally capable of upholding their duties responsibly. This program caught the attention of other departments and has since started spreading nationwide.

The 21st Century policing model has proven quite successful in the Plymouth community - reflected by the 93% overall feeling of safety reported by residents! So much so that the community sees a crime rate that is over 1/3 lower than the national average.

To continue fostering trusting relationships with the community through added communication, the department has introduced new technology to help improve the collection of information, including:

Besides the 21st Century Policing Model, the department also contributes much of its success to its involvement within the community. In 2019 alone, department staff took part in a record-breaking 533 events. This allows them to spend time with the community, getting to know everyone on a more personal level. It also lets residents see police as approachable neighbors, rather than outside, unknown enforcers.

Plymouth's Public Safety Department Will Continue To Lead By Example

To do this, Plymouth Police will continue to lead by example. They will continue to prioritize transparency, accountability, and conversations that discuss best practices in police services - not only in their own community but regionally and nationally.

Previous Story
← How to Save Time and Eliminate Silos While Maximizing Engagement
Next Story
How Can Municipalities Prepare For Their Recovery Funding? →

What Is The Right Way to Rebuild Cities for Post-Pandemic Work?