“We don’t just provide lip service to the act of building community. We take the time to actually and continuously build our city,” said Eric Stuckey, City Administrator for Franklin, Tennessee.

And Franklin’s residents have noticed this commitment.

The Town regularly conducts The National Community Survey (The NCS) to gather feedback from residents. Data from the survey show that Franklin’s residents are very pleased with the City’s community engagement. Residents rate most aspects of community engagement above the national average on The NCS, including a sense of community and opportunities to participate in community manners. 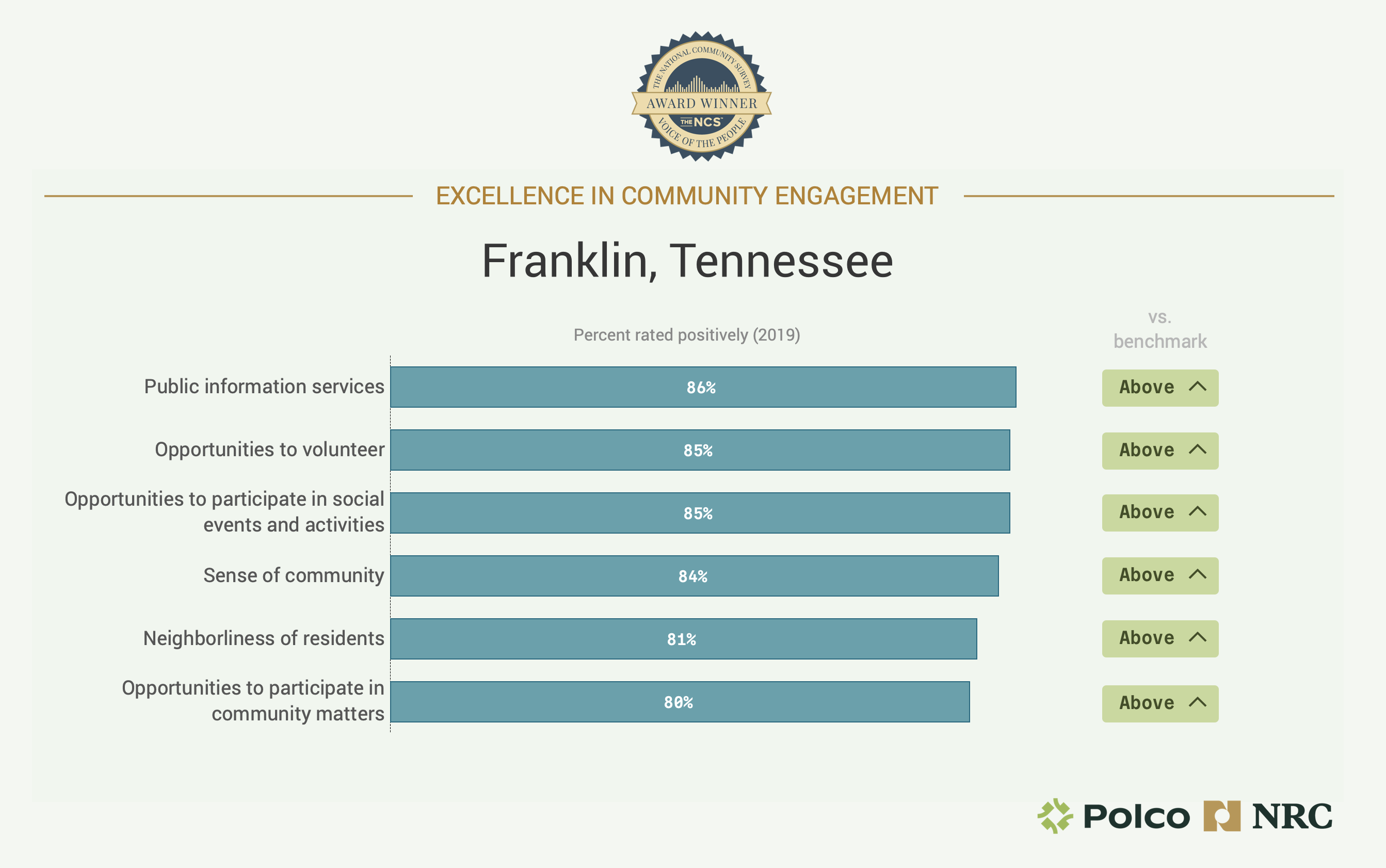 Franklin’s efforts led to a 2020 Voice of the People Award for Excellence in Community Engagement. This is the only national award that honors local governments based on feedback from residents. The award is presented by Polco / National Research Center (NRC) and the International City & County Management Association (ICMA). This award acknowledges local governments that score highly on The NCS ratings and that take the best actions on behalf of their communities. 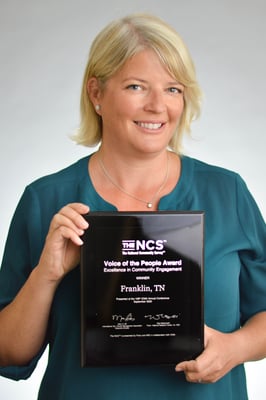 “We are especially humbled in knowing that these awards come directly from the responses of our citizens and taxpayers who share our belief that Franklin, Tennessee is one of the best places to live, work, play and grow anywhere in Tennessee and the United States,” said Stuckey.

Many Ways To Engage

Franklin leaders engage residents in many different ways. The City is very active on Facebook, Instagram, Twitter, and Next Door. They actively track their followers, engagement, and impressions. The team responds quickly to messages. The City tends to take a lighter, informative approach to draw more people in.

In addition to using social media, the City hosts public meetings and encourages active civic groups. For over two decades, the independent non-profit Franklin Tomorrow has helped the City work towards a shared vision for the future of Franklin.

Franklin Tomorrow provides a variety of opportunities for engagement, including a quarterly Breakfast With the Mayors (City and County Mayors) and a monthly FrankTalks lecture series that highlight issues facing the community.

Beginning in 2018, Franklin Tomorrow also began a community initiative called On The Table. This initiative provides an opportunity for people to gather in small groups to share a meal and have a real conversation about what’s important to them.

Last, the City of Franklin has multiple planning processes in place to help the City set goals and track how well they are meeting them. Ten percent of Franklin’s Strategic Plan is tied directly to questions asked in The NCS.

In addition to providing residents many ways to engage, Franklin builds community through cultural opportunities.

“Cultural opportunities are vitally important to the vitality of Franklin,” said Stuckey.

Franklin hosts numerous festivals, many in the City’s Historic Downtown. Some of these festivals include Arbor Day, Main Street Festival, Kids Arts Festival, Celebration of the Nations, Wine Down Main Street, The Pilgrimage Festival, and Dickens of a Christmas, among others.

Even during COVID-19, Franklin reimagined their typical festivals to provide safer celebrations that still captured the essence of the Holidays.

“Government must be at its best when times are worst. While we can’t hold events during this pandemic, it is imperative that the people know we are here, we are open and that their government is responsive to their concerns,” said Stuckey.