How To Turn Big Data Into Successful Community Decisions

How To Turn Big Data Into Successful Community Decisions

The amount of data available is at an all-time high. Yet many local governments lack the time, skillset, and resources to incorporate information into decision-making. But new technology and engagement tools make data analysis easier than ever before.

Experts discuss how that’s possible in Polco and NLC’s latest webinar, How to Turn Big Data into Successful Decisions. Learn how to incorporate community feedback in your planning. See how community engagement works with a case study presented by Kate Parmelee, the Director of Strategic Initiatives at Port St. Lucie, Florida. And learn how governments can utilize academic partners to collect data with Arizona State University associate professor and director David Swindell. 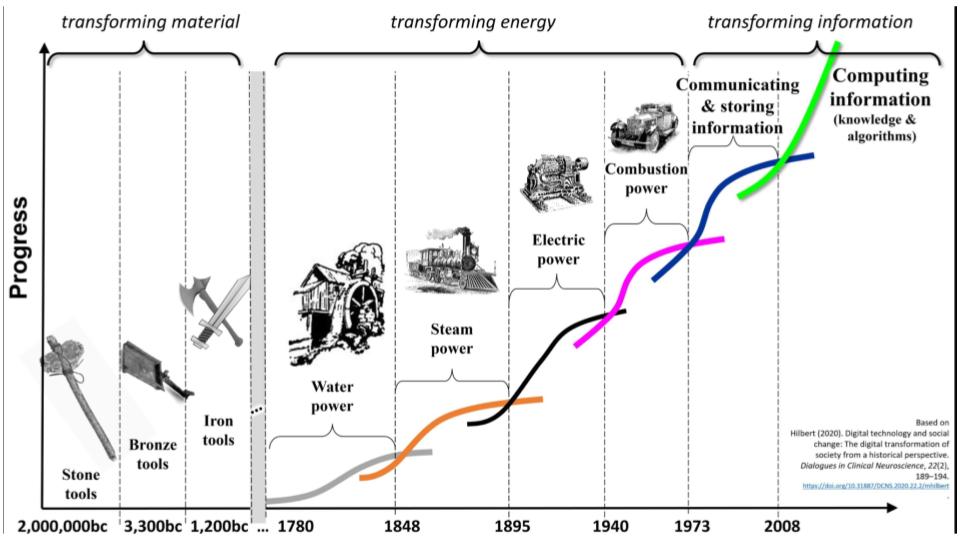 The Age of Information and The Digital Divide

We have had major transformations over the past thousands of years, from transforming material to energy to information. “We have moved from an industrial age to an information age,” said Michelle Kobayashi, Polco Vice President of Innovation.

The pandemic pushed more people online than ever. That rapid transformation created both anxiety and excitement, Kobayashi says. There are now new opportunities and an abundance of information at our fingertips.

But there is a growing wedge between who has digital access. Kobayashi says she often quotes Jeff Bertolucci, who said, “Big data is the new oil.” She says organizations that can mine this resource will have a tremendous advantage over those that don’t.

“The majority of cities across America are small and don't have the funding they need to embrace technology the way they want to,” Kobayashi said.

Plus, local governments are having a more difficult time finding skilled employees. Remote work and the gig economy lured many people away from government jobs. And many people migrated to cities with more amenities, like outdoor access, which shrunk the hiring pool in some places.

“But there are things we can do with data regardless of our resources,” Kobayashi said. 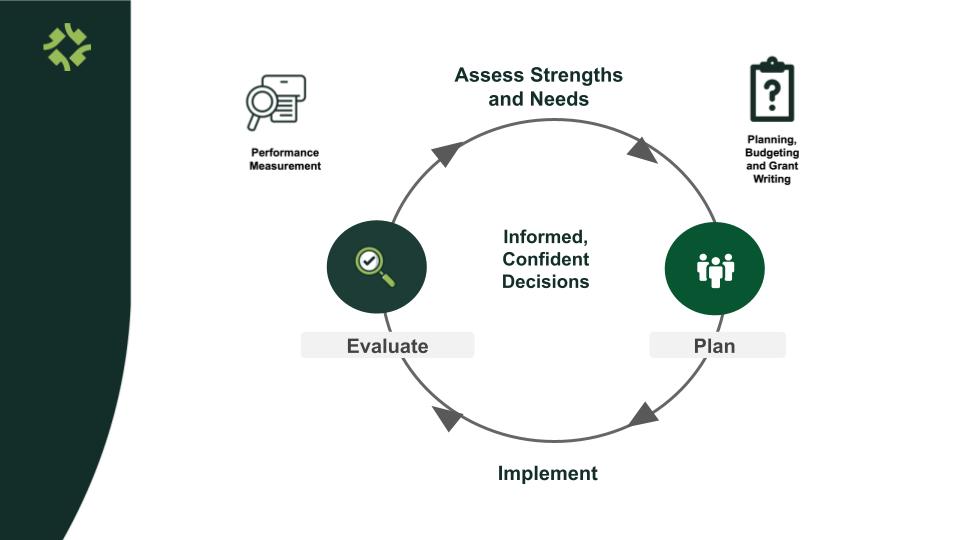 Collecting insights directly from residents is an excellent way to measure what’s important and incorporate that information into strategic planning. Kobayashi says in her experience working with local governments, data makes processes and debates more efficient.

“[Council members] didn’t spend the day arguing over what’s important to residents—we already know,” she said. “It not only saved time, it got everyone onto the same page.”

Kobayashi says data is also useful for government grant writing. There is an unprecedented amount of money coming in from the federal government. Simultaneously the grant application process has gotten more sophisticated and requires more detailed information, such as demonstrating need and city performance, from those applying for grants.

While the additional grant requirements seem good on the surface, it’s pushing that digital divide even further. Communities that need the money the most don't have the resources or expertise to apply for grants.

“This kind of data is very useful in stating your need that you want to be accountable. And even if your funders say you don’t need to prove it, I would argue that your residents want you to show that you’re a good steward with their money,” Kobayashi said. 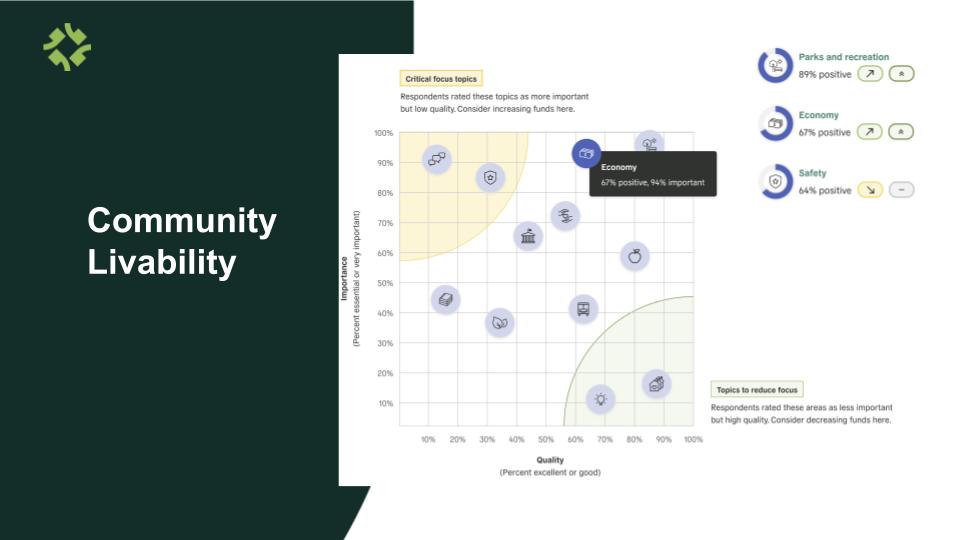 Resident Voice as a Data Point

Cities use engagement tools such as The National Community Survey (The NCS) to collect information. The survey shows what issues are the most important to residents and their opinion of the quality of government services. The information reveals where leaders should focus their attention in strategic planning.

If a survey shows that residents think safety is of high importance but scores low in quality, it would be advantageous for local government planners to focus on improving safety in their plans.

Making data-informed decisions means being intentional, capitalizing on technology, and collaborating with residents. “What’s good for the community is good for all of us,” she said.

Port St. Lucie sits between Orlando and Miami and is the seventh-largest city in Florida.

“We are that classic Florida story. We were a place where with $10 down and $10 per month you could own a piece of paradise in the 60s,” said Kate Parmelee, Port St. Lucie Director of Strategic Initiatives.

Port St. Lucie started as a retirement community, so it didn’t have a typical city infrastructure. Parmelee says it’s an interesting place to do community engagement because the City is slightly disconnected geographically.

Port St. Lucie also dealt with a lot of changes quickly. They had 300 residents in the 70s and are now home to over 224,000. The population growth required a nimble government.

Luckily, the council has always supported strategic planning. But the same people, mostly retirees, kept showing up to town hall meetings. The council wanted to get more people involved in the process.

“We cannot create a truly inclusive city that is built with our residents without a more inclusive process in obtaining their feedback,” Parmelee said. “We know the people who come to our public meetings all the time. We value their feedback, but there is a chance that you have a resident dominating the political narrative and you don't hear from a broader cross-section of your community.”

Leaders decided to conduct The NCS because they could reach a representative group. The NCS gave Port St. Lucie decision-makers foundational knowledge on where to focus on improvements.

“When council members are so overwhelmed with the amount of information on and feedback through Facebook, through comments—just all the information in this information age we’re living in— it helps us distill what to focus on first,” Parmelee said.

They then launched a Citizen Summit to investigate The NCS data deeper. For instance, if residents said they wanted more parks and recreation opportunities, they could discuss the details of what that might look like at the Citizen Summit.

The City implemented an engagement cycle that they continue to a regular cadence. Part of the strategy is reporting back to residents how they included their input in plans so they can see the value of participation.

The City Council prioritized an International Festival in their latest strategic plan. They funded the event in the budget, and the festival is coming in September 2023.

Port St. Lucie also used community engagement to pass a half-cent sales tax initiative that initially failed. City leaders then talked to residents to see what projects they would want to see the money go toward. After connecting with residents, the initiative passed overwhelmingly.

“We found that the engagement process is so critical in making better decisions,” Parmelee said. “We do not have a team of data scientists—I wish we did—but we’re lucky we can partner with organizations like the National Research Center (Polco)  and others to further accelerate our use of data. We find that we are better for it.”

Lessons From Arizona State University of School of Public Affairs

David Swindell is the director for the Center for Urban Innovation at ASU and a faculty member for the school of public affairs. His department does a lot of work to help local governments improve their managerial capabilities.

ASU worked with ICMA to find out how many communities are using community engagement and performance measurement to improve services.

“About 40% of the cities do collect this data, but only a fraction actually uses it for performance management,” he said.

ASU worked with local Arizona governments to create The Benchmark Communities Project. The top 15 largest cities in the valley debate what quality-of-life indicators they want to measure. Then they determine how they can measure them consistently over time. The 15 cities then compare their results to better understand their performance.

ASU is the unbiased facilitator of the conversation. That helped establish trust between the local governments. As a result, Swindell said there are more regional collaborations, such as a multi-city opioid response.

He said universities are a well of intellectual capital for governments that are lacking resources. Plus, people in academia are skilled at translating data into actionable steps, he said.

“It’s not just the faculty that can help train staff to utilize these kinds of information sources, but it’s also the students,” he said. “The students, who are the next generation of local government leaders, are working in those programs.”

Want to learn more about how you can improve your decision-making with community data?