This case study is part of our Voice of the People Award series. VOP winners are selected based on their results on The National Community Survey (The NCS), a resident feedback assessment that focuses on the foundations that create a high quality of life. Categories include the economy, safety, utilities, design, inclusivity, natural environment, parks and recreation, and health and wellness. Winners demonstrated significant improvements or excellence on The NCS in each category.

Honolulu, Hawaii, is known for its natural beauty and optimal weather. The environment and climate encourage people to get outside, surf, hike, and swim. While Covid presented many challenges, the City took the unfortunate circumstance and turned it into an opportunity to improve Honolulu’s parks and rec offerings. The City also offered unique health and wellness services for its residents during the pandemic. That adaptability during a hard year is why they won two VOP awards for Transformation in Parks and Recreation and Transformation in Health and Wellness. 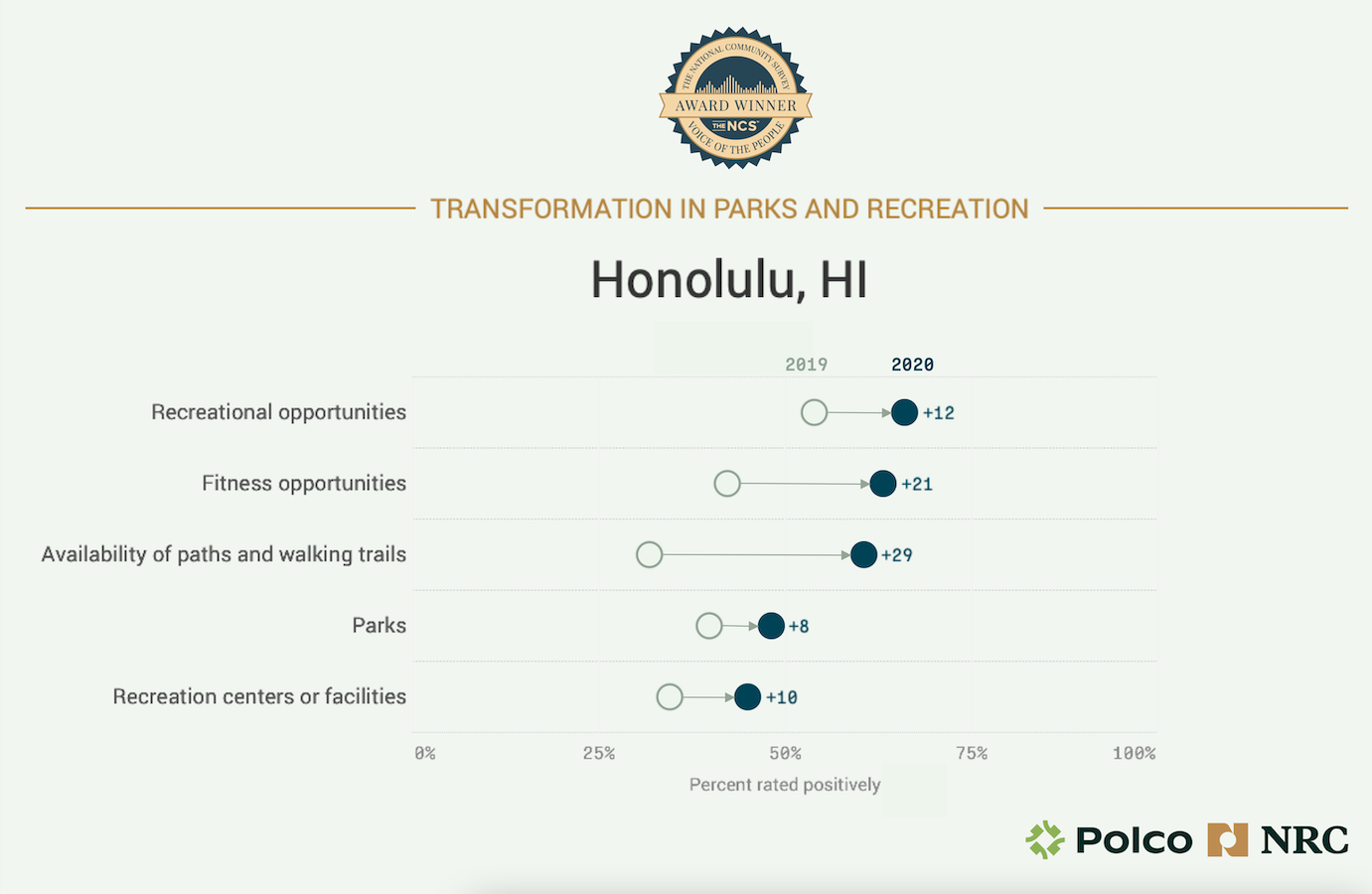 Transformation in Parks and Recreation

Hawaii has the reputation of a tropical paradise with perfect weather, perfect sand, and perfect waves. But it comes with a downside.

“Here in Hawaii, our beautiful weather is a blessing and a quasi-curse when it comes to parks and recreation because we don't have a time period when our facilities rest,” said spokesman for Honolulu’s Parks and Recreation department, Nate Serota. “The facilities are available year-round, through the wet and dry season. There is no designated time to close and maintain them.”

Plus, the landscape and white-sand beaches draw in masses of travelers. The barrage of people makes it difficult to regulate popular destinations. 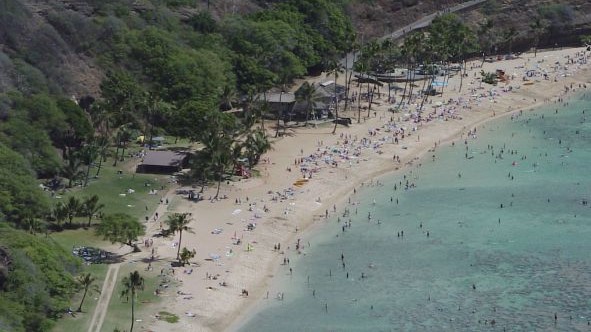 Hanauma Bay, for instance, is a site of spectacular views and famous snorkeling. But the constant flood of over 3,000 daily visitors stresses the landscape and its coral reef. Hanauma Bay got a break from the pummeling of flip flops and sunscreen chemicals during Covid when officials shut the area down.

Reopening Hanauma Bay presented a golden opportunity for the City of Honolulu to improve crowd management. A visit to this location now requires reservations through a new in-house Parks and Recreation Online System, PROS, and increased fees that go back into maintaining the nature preserve.

According to The NCS, eight in 10 Honolulu residents stress the importance of park upkeep. “It behooves us to keep up with the maintenance. That can be difficult when you have 306 park locations on 5000 acres across a tropical island,” Serota said. 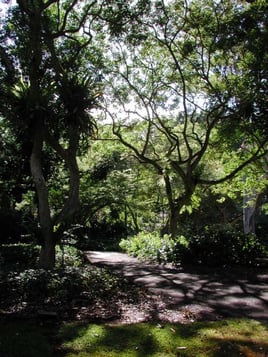 Even with preservation challenges and shutdowns, parks and trails have become more accessible in recent years. Positive ratings toward availability of walking trails improved from 32 to 61 percent, according to The NCS results.

There’s been a cumulative effort across different government jurisdictions and other partners to improve recreational amenities, Serota said.  (The State Department of Land and Natural Resources manages most of Honolulu's hiking trails.)

The City partnered with non-profits and made improvements to iconic locations like the Koko Crater Tramway, a path that leads to the Pu'u Mai Summit of Kohelepelepe. Workers devoted 6,000 volunteer hours and hauled 608,000 pounds of supplies up the mountain to install hundreds of new tramway stairs by hand.

Serota said the City emphasized repaving and renovating several other park pathways, like the recent sidewalk project near the Honolulu Zoo. The City updated a quarter mile of deteriorating pathways due to heavy foot traffic.

One of the most successful strategies to improve trails is to close them down. It caused temporary inconveniences for locals who missed their favorite hikes, but the short-term shutdowns saved beloved paths in the long run.

Through closures, they’ve seen significant improvements in places like the Manoa Falls Trail. Over 1,000 hikers made their way through the popular path lined by banyan trees and tropical flowers each day, which created significant distress. The path was resurfaced, widened, and benches were restored or added. Now people are back on the shady trail.

Honolulu continues to prioritize their parks. Serota mentioned that the new administration put a significant emphasis on equity. More funds have been allocated to rural areas than they have in recent history, so Hawaiians can expect to see outdoor improvements outside of the urban core.

Like with park maintenance, Covid nudged the Parks and Recreation team in new directions with fitness services. Even though centers were shut down, recreational and fitness opportunities increased by 12 and 21 percent, respectively.

In 2020, the City started the Pāka ma ka Hale (Parks at Home) online classes. The department created dozens of crafting, exercise, and how-to videos to keep people active during quarantine. They also created Kūpuna (Seniors) in the Park, a video series with exercise routines, cooking, and craft tutorials catered toward the elderly population.

Transformation in Health and Wellness

Health and wellness opportunities are improving in Honolulu, too.

The City launched oneoahu.org, a health information portal, and a call center during Covid. Since then, the website has been visited 9 million times and the call center has answered over 100,000 inquiries. Both of these resources were vital in addressing community health concerns during the crisis. Residents recognized the City’s efforts; positive ratings for health services increased by 22 percent (to 59 percent total) on The NCS. 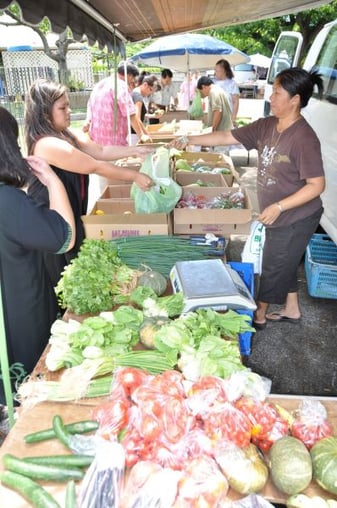 Honolulu officials were able to recognize resident concerns and direct funding and energy toward those areas. By conducting The NCS each year, they were able to see how their execution paid off. The improvements made by the City of Honolulu demonstrate that significant positive change is possible within one short year, even during hard times. 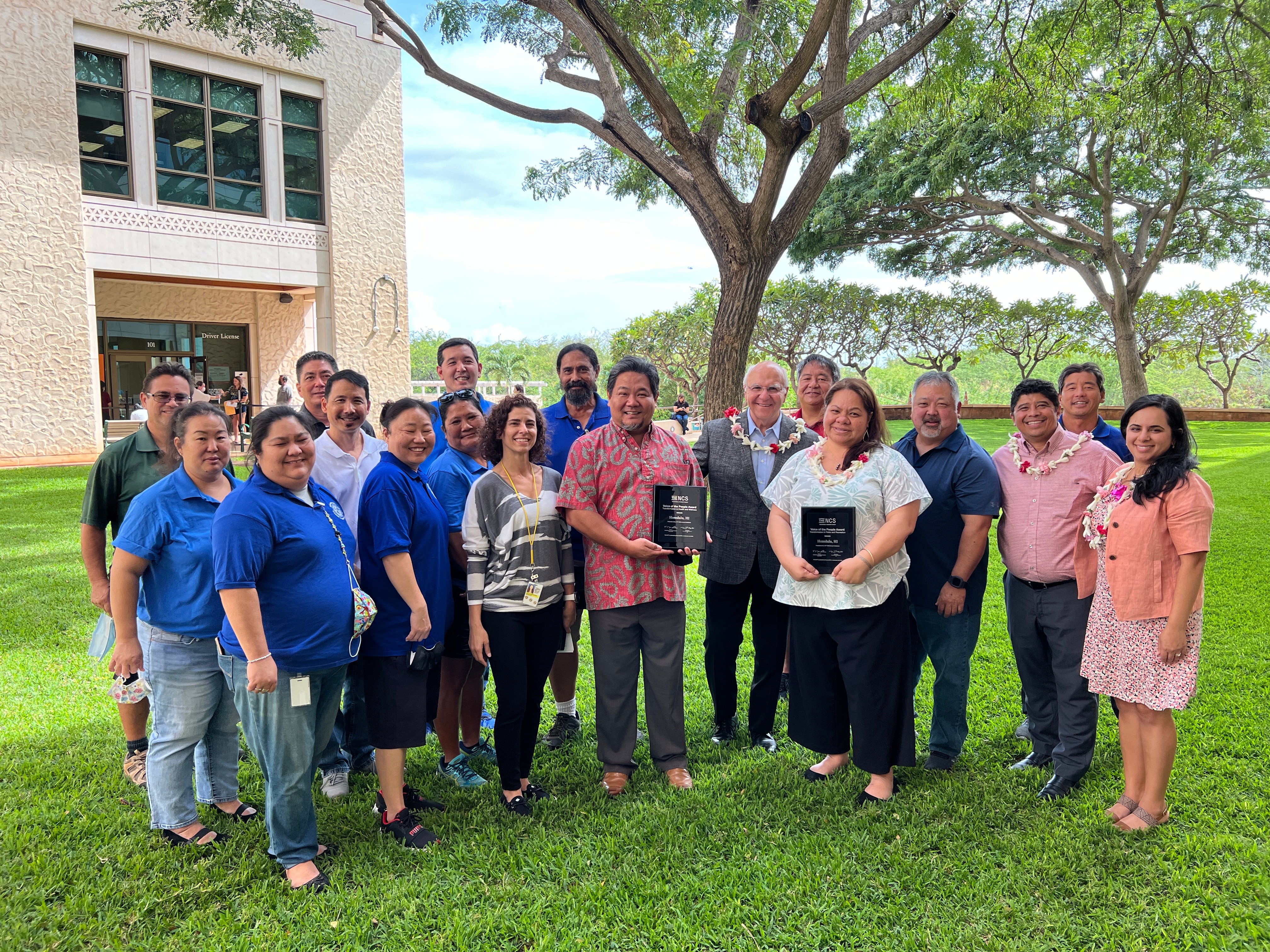 Honolulu VOP Award presentation. Courtesy of the City and County of Honolulu. 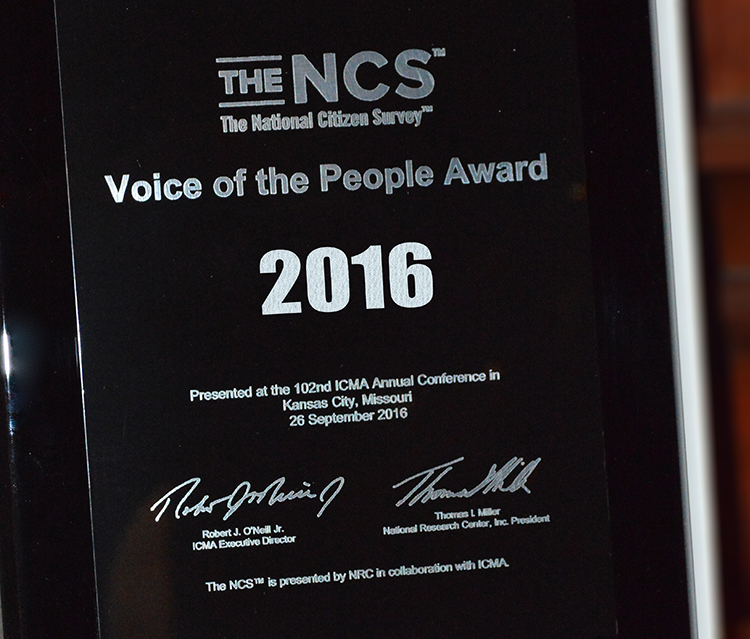 October 3, 2016 5 min read
How a Focus on Recreation for All Led To Increased Resident Satisfaction in Morristown 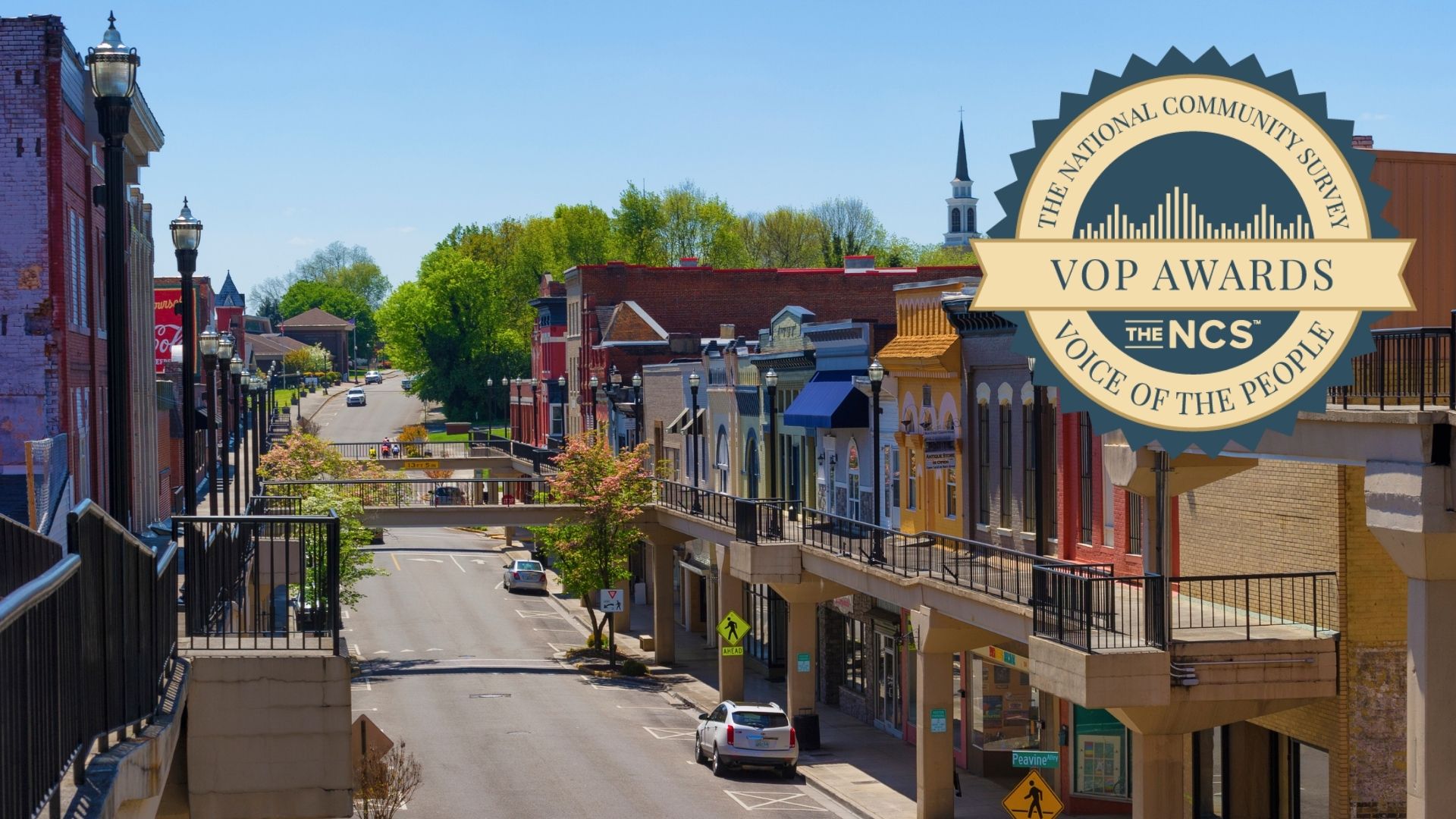 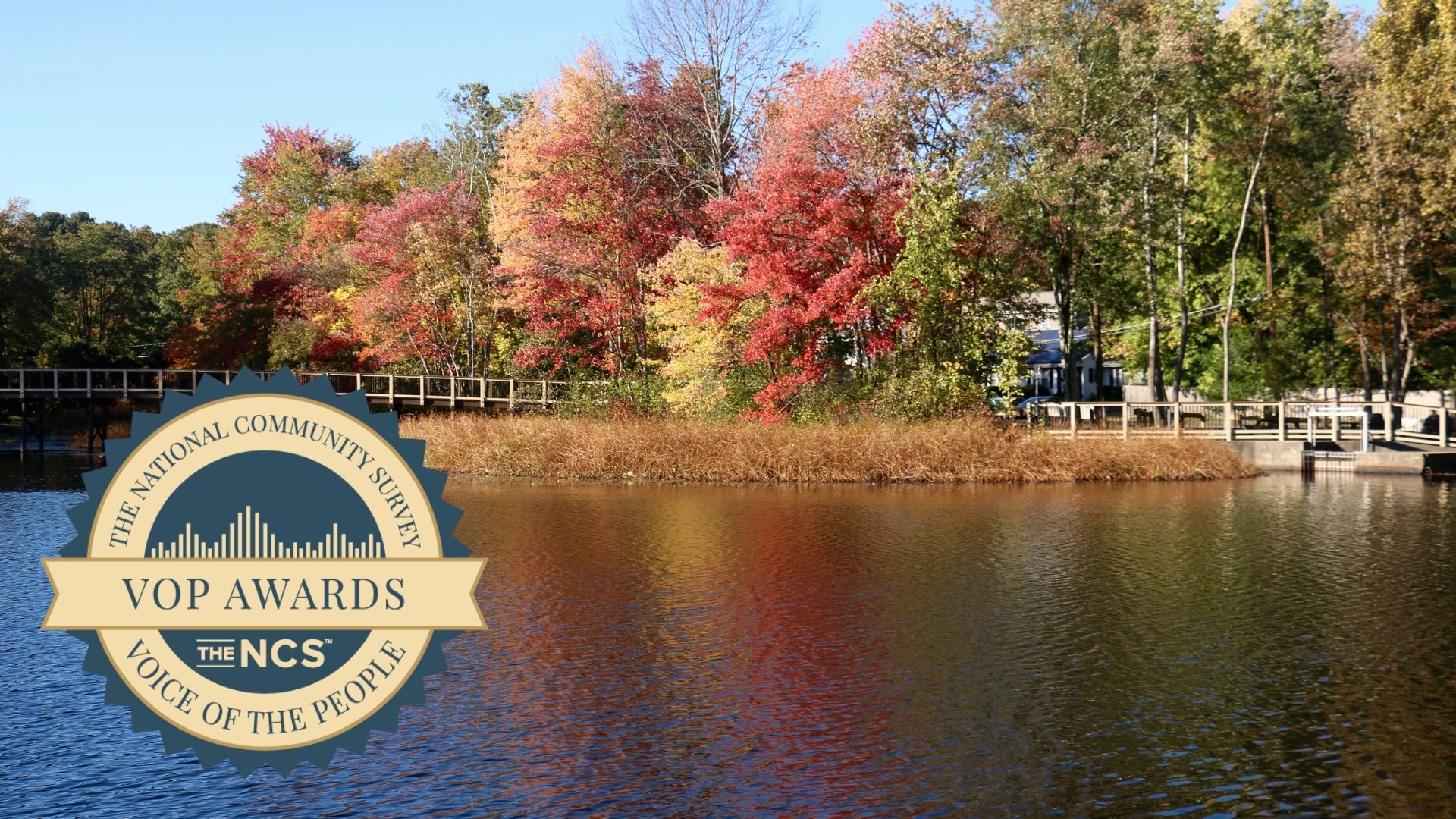 How Ashland Transformed the Natural Environment By Increasing Open Spaces